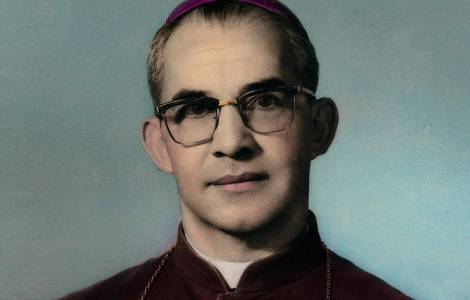 Arauca (Agenzia Fides) - On September 8, 2017, in the city of Villavicencio - Meta, during his apostolic journey to Colombia, Pope Francis proclaimed Blessed Monsignor Jesús Emilio Jaramillo Monsalve, first bishop of the diocese of Arauca, a martyr together with the priest Pedro María Ramírez.
To commemorate the fifth anniversary of the beatification, Holy Masses were celebrated in all the parishes of the diocese to thank God for the gift of this Bishop, who gave his life to proclaim the message of peace and reconciliation of Jesus Christ.
For this anniversary, a play on Blessed Bishop Jaramillo was also produced and staged. The artistic project is the result of a proposal by the pastoral delegation of youth and vocations. After a demanding investigation into the life and work of the Blessed, it was possible to write the script for this play, performed by young people from Arauca, who wanted to convey joy, nostalgia, hope and faith.
Blessed Jesus Emilio Jaramillo Monsalve, was born in Santo Domingo (Antioquia) on February 14, 1916. He entered the seminary of the Institute of Foreign Missions in Yarumal and was ordained a priest on September 1, 1940. He held many positions of responsibility during his priestly life.
Pope Paul VI appointed him Apostolic Vicar of Arauca and Pope John Paul II, when he raised the vicariate to the rank of diocese on July 19, 1984, appointed him the first bishop of that jurisdiction. From the Cordillera, passing through the foothills and reaching the plains, Bishop Jaramillo tirelessly traveled the territory of his diocese, always concerned to give spiritual and human attention to each of the faithful of this particular Church, seeking to build peace , reconciliation and enhancing the dignity of men and women. He was kidnapped by armed bandits on October 2, 1989, along with three priests and a seminarian, while on a pastoral visit to Fortul, 800 km east of Bogotá. He was found dead the next day, killed by four bullets to the head.
In the homily for the beatification mass, Pope Francis said: "Jesus is the Emmanuel who is born and the Emmanuel who accompanies us every day, he is the God with us who is born and the God who walks with us to the end of the world. This promise is also fulfilled in Colombia: Msgr. Jesús Emilio Jaramillo Monsalve, Bishop of Arauca, and the priest Pedro María Ramírez Ramos, martyr of Armero, are signs of this, the expression of a people who want to get out of the quagmire of violence and resentment".
This week, from September 4 to 11, under the motto "Territories in movement for Peace", the Colombian Episcopal Conference (CEC), through the National Secretariat of Social Pastoral and various regional and national social organizations, celebrates the 35th edition of the "Week for Peace". The organizers chose the slogan that highlights the territory to give strength to the concept according to which "the territories express the diversity and the social, cultural and political vitality of the country". Tensions, conflicts and the harshness of violence are experienced there, but hope, resistance and courageous efforts to build decent living conditions are also manifested there. Peace is therefore woven day after day from the territories" (see Fides, 3/9/2022). (SL) (Agenzia Fides, 10/9/2022)