AMERICA/ARGENTINA - The martyrs of La Rioja beatified: "they lived and died out of love" 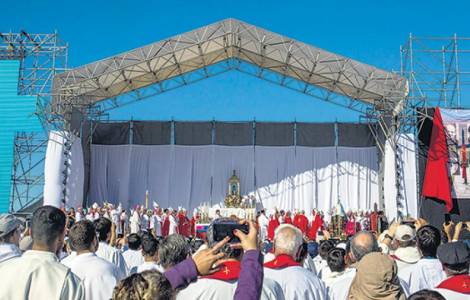 La Rioja (Agenzia Fides) - "Today the Church is pleased to recognize that Enrique Ángel Angelelli, Bishop of La Rioja, Carlos de Dios Murias, conventual Franciscan, Gabriel Longueville, fidei donum missionary priest, and the catechist Wenceslao Pedernera, family man, insulted and persecuted because of Jesus and evangelical justice, and obtained a great reward in heaven", said Cardinal Angelo Becciu, Prefect of the Congregation for the Causes of Saints, who presided in the name of the Holy Father, the rite of beatification in La Rioja, Saturday, April 27. The Mass was concelebrated also by Cardinal Mario Aurelio Poli, Archbishop of Buenos Aires, Cardinal Luis Villalba, Archbishop emeritus of Tucumán, apostolic Nuncio León Kalenga Badikebele, about forty bishops including a delegation from France, numerous diocesan and religious priests, along with members of the OFM general curia conv. Thousands of faithful took part in the celebration, held in the city park. Representing the national government were vice-president Gabriela Michetti and the Secretary of the Cult, Alfredo Abriani, as well as local and political authorities.
"They were assassinated in 1976, during the period of military dictatorship, characterized by an incandescent political and social climate, which also had clear aspects of religious persecution", the Cardinal emphasized in his homily, and praised all four men for carrying out ministries that were rooted in defending the rights and dignity of the poor within the framework of the church's social doctrine. All this, to try to offer solutions to multiple social problems. It was a work of faith formation, of a strong religious and social commitment, anchored in the Gospel, in favor of the poorest and most exploited and carried out in the light of the newness of the Second Vatican Council. We could define them, in a certain sense, as 'martyrs of the conciliar decrees.' " ... The four Blesseds offer a distinct model for Christian living. Blessed Angelelli’s example teaches today's bishops to fulfill their ministry with ardent charity and being strong in faith in the face of difficulties. Blesseds Murias and Longueville, teach today’s priests to lead prayerful lives: do not enter in compromise with faith, remain faithful to the mission, ready to embrace the cross. Blessed Pedernera is is an example for lay men and women to be transparent in the faith and allow themselves to be guided by it in life's most important decisions".
Cardinal Becciu then stressed that the four new blesseds "lived and died out of love", and explained: "The meaning of the martyrs today is that their testimony cancels the claim to live selfishly or to build a closed model of society, without reference to moral and spiritual values. The Martyrs urge us, together with future generations, to open our hearts to God and to our brothers, to be announcers of peace, to work for justice, to be witnesses of solidarity, despite misunderstandings, trials and fatigue" .
In the conclusion of the homily, the Prefect of the Congregation for the Causes of Saints wanted to emphasize that their courage and loyalty in difficult circumstances are "a legacy for this diocese and for all the Argentine people, and a responsibility that must be lived in all ages". Finally he expressed the hope that "the example and the prayer of these four Blesseds will help us to be more and more men of faith, witnesses of the Gospel, builders of communities, promoters of a Church committed to bearing witness to the Gospel in all areas of society, building bridges and demolishing the walls of indifference".
The liturgical feast in honor of Blessed Mgr. Angelelli and his fellow martyrs will be on 17 July, the day of his birth in heaven. (SL) (Agenzia Fides, 29/4/2019)