VATICAN - MISSIONARIES KILLED IN THE YEAR 2018 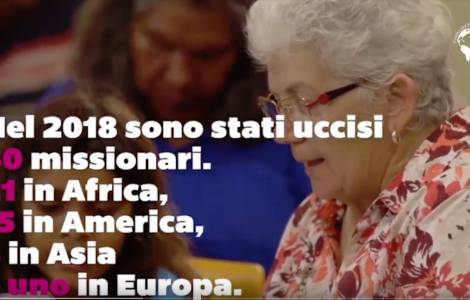 Vatican City (Agenzia Fides) – In the course of the year 2018, 40 Missionaries were killed throughout the world, almost double the 23 of the previous year, and they were priests for the most part: 35. After eight consecutive years in which the highest number of Missionaries killed was recorded in America, in 2018 it is Africa to take the first place in this tragic category.
According to the data collected by Fides Agency, in 2018, 40 Missionaries were killed: 35 priests, 1 seminarian, and 4 lay people. In Africa, 19 priests, 1 seminarian, and 1 lay woman were killed (21); in America, 12 priests and 3 lay people were killed (15); in Asia, 3 priests were killed (3); in Europe, 1 priest was killed (1).
We are using the term “missionary” for all the baptized, aware that “in virtue of the Baptism received, every member of the People of God has become a missionary disciple. Each baptized person, whatever his function in the Church and level of instruction in the faith, is an active agent of evangelization” (EG 120). For the rest, the annual list of Fides, now for some time, does not look only to Missionaries ad gentes in the strict sense, but tries to record all the baptized engaged in the life of the Church dying in a violent way, not only “in hatred of the faith”. For this reason, we prefer not to use the term “martyrs”, if not in its etymological meaning of “witness”, in order not to enter into the question of the judgment that the Church might eventually deliver upon some of them.
Even this year many Missionaries have lost their lives during attempted hold-ups and robberies, ferociously committed, in impoverished, degraded social contexts, where violence is the rule of life, the authority of the state was lacking or weakened by corruption and compromises, or where religion is used for other ends. Everywhere priests, religious, and laymen share the same daily life as the common people, bringing them the evangelical witness of love and service for all, as a sign of hope and peace, trying to alleviate the suffering of the weak and raising their voices in defense of their trampled rights, denouncing evil and injustice. Even in danger of their own safety, at the request of civil authorities or their own superiors, the Missionaries remained at their posts, aware of the risks which they were running, in order to remain true to the duties they bore. (S.L.) (Agenzia Fides 29/12/2018)