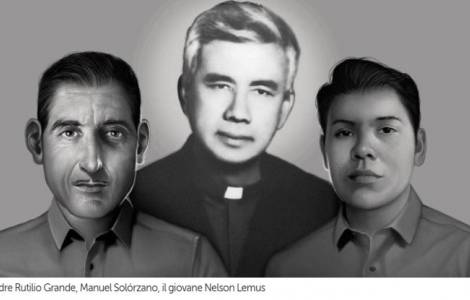 San Salvador (Agenzia Fides) - The Salvadoran Catholic Church has announced that the Beatification of the Salvadoran martyrs Father Rutilio Grande, Jesuit Manuel Solórzano and Nelson Rutilio Lemus Chávez, lay people, and of the Italian Franciscan Fray Cosme Spessotto, OFM, will take place on January 22, 2022, in the atrium of the Metropolitan Cathedral of San Salvador.
"It has been decided that the beatification will be in San Salvador, but it is up to the Bishops to choose the place, and we have already chosen it, and it will be the Cathedral of San Salvador", explained Archbishop of San Salvador, Monsignor José Luis Escobar Alas, during the press conference of the announcement, on Sunday, August 29. Archbishop Escobar Alas also confirmed that Pope Francis has appointed Salvadoran Cardinal Gregorio Rosa Chávez as his Special Delegate to preside over the celebration of these other four martyrs who will rise "to the honors of the altars", thus joining Saint Oscar Arnulfo Romero, canonized in 'October 2018 by Pope Francis himself.
The Archbishop regretted that the celebration of the beatification of the martyrs is not like that of Saint Oscar Arnulfo Romero, which took place in the Plaza del Divino Salvador del Mundo, on May 23, 2015, with a considerable number of faithful, because the context of the coronavirus pandemic does not allow it. "We do not think of a party with a large influx of people, rather a celebration where there are representations, since the square can accommodate a good number of people, always respecting biosecurity measures such as masks and alcoholic gel. It will be broadcast on social media, so that people can follow it and participate in the beatification", he explained.
Jesuit priest Rutilio Grande was born on July 5, 1928 in El Paisnal, and was assassinated on March 12, 1977 by the death squads of the Salvadoran army, while he was parish priest in the city of Aguilares. He was a friend of Saint Oscar Arnulfo Romero, murdered three weeks before him. Along with Father Rutilio, Manuel Solórzano, 72, and Nelson Rutilio Lemus Chávez, 15, were also assassinated. The three were traveling in a jeep to El Paisnal, where the priest was supposed to celebrate a mass, but on the way they were stopped and shot. The Italian Franciscan missionary Fr. Cosma Spessotto, OFM, born in Mansué in 1923, in El Salvador since 1950, was shot dead by an unknown person in San Juan Nonualco, on June 14, 1980, while praying in front of the altar before celebrating Holy Mass. (CE) (Agenzia Fides, 1/9/2021)