AMERICA/ARGENTINA - La Rioja remembers its martyrs, the next blessed 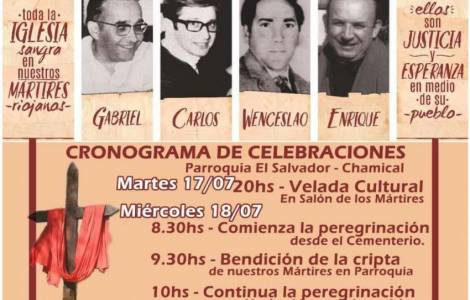 Chamical (Agenzia Fides) - The city of Chamical, in the province and diocese of La Rioja, is preparing to celebrate the 42nd anniversary of its martyrs: Bishop Enrique Angelelli, Fathers Carlos Murias and Gabriel Longueville, and layman Wenceslao Pedernera. On 8 June, the Holy Father signed the decree recognizing the martyrdom in hatred of the faith and therefore paves the way for their next beatification (see Fides 9/6/2018).
The celebrations will begin on the evening of July 17, in El Salvador parish in Chamical, with a cultural evening. On Wednesday 18th, during the morning, pilgrimages to the place of martyrdom will take place. At 9.30 am the Crypt of the Matyrs will be blessed in the parish church, and at 12 o'clock Mass will be celebrated.
Also the diocese of Cruz del Eje, has invited its faithful to take part in these celebrations that will take place in Chamical.
Mgr. Enrique Angelelli (1923-1976), Bishop of the diocese of La Rioja, never hid his opposition to dictatorship. He died in a simulated car accident on August 4, 1976. After 38 years, on July 4, 2014, two senior officers were sentenced to life imprisonment for his murder.
Carlos Murias, a young conventual Franciscan, native of Cordoba, worked in the diocese of La Rioja, where Bishop Angelelli, who had ordained him a priest, had sent him among the poor of Chamical. He was controlled by the military and looked on with suspicion, for his efforts in defense of the peasants. On July 18, 1976, a group of men, who presented themselves as policemen, took him together with the parish priest of Chamical, Fr. Gabriel Longueville, French fidei donum. Their bodies were found two days later, atrociously tortured before being shot. Wenceslao Pedernera, peasant, organizer of the Movimiento Rural Catolico, was murdered in his home by four hooded men on 25 July 1976. (SL) (Agenzia Fides, 17/7/2018)