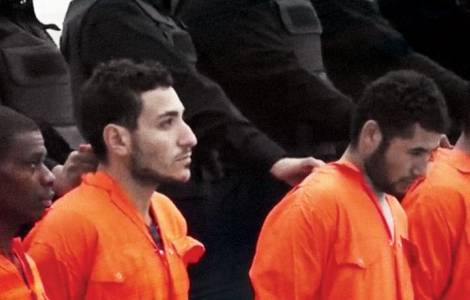 Samalut (Agenzia Fides) - Fifteen days of "spiritual awakening" to live in grateful memory of those who died seven years ago whispering the name of Jesus while being killed by a group of jihadists. This is the proposal addressed to Egyptian Christians by the Coptic Orthodox diocese of Samalut, in the province of Minya, on the occasion of the seventh anniversary of the martyrdom of the twenty Egyptian Coptic Christians murdered on a Libyan beach in February 2015 together with their Ghanaian co-worker at the hands of a group of terrorists from the so-called Islamic State (Daesh).
The liturgical and ecclesial events in commemoration of the Coptic martyrs of Libya will take place from February 1 to 15, and will once again have as its epicenter the Shrine built in their honor in the town of al Awar, where most of them came from. Anba Pavnotios, Coptic Orthodox Bishop of Samalut, announcing the commemorative events that will consist of liturgical celebrations, conferences, visits to the sanctuary-museum and prayer meetings. The bishop also invited everyone to treasure the benefits and spiritual blessings that the martyrs of Libya will be able to make those who commemorate them with heartfelt gratitude flourish.
Last year, due to the social distancing measures imposed to counter the COVID-19 pandemic, only a limited number of people were able to participate in the only liturgy held at the shrine by Anba Pavnotios to commemorate the martyrs of Libya. The flow of pilgrims to the sanctuary, although less due to periods of forced closure and measures to combat the pandemic, has never been interrupted.
The 20 Egyptian Copts and their Ghanaian co-worker were kidnapped in Libya in early January 2015. The video of their beheading was posted on various jihadist websites the following February 15. Just a week after the news of the massacre, the Coptic Orthodox Patriarch Tawadros II decided to inscribe their 21 names in the Synaxarium, the book of martyrs of the Coptic Church, establishing that their memory be celebrated precisely on February 15.
The mortal remains of Copts killed in Libya were found at the end of September 2017 in a mass grave on the Libyan coast near the city of Sirte. Their bodies were found with their hands tied behind their backs, dressed in the same orange overalls they wore in the macabre video filmed by the executioners at the time of their beheading. In the video of their execution, it was clear that many of the martyrs just before they were killed whispered the words 'Lord Jesus Christ'. Then, in a conversation with Fides, Anba Antonios Aziz Mina, Coptic Catholic bishop (now emeritus) of Guizeh, assured that "the name of Jesus was the last word that came to their lips. As in the passion of the first martyrs, they entrusted themselves to the One who would welcome them shortly afterwards. And so they celebrated their victory, the victory that no executioner can take away from them. That name whispered at the last moment was like the seal of their martyrdom". (GV) (Agenzia Fides, 4/1/2022)