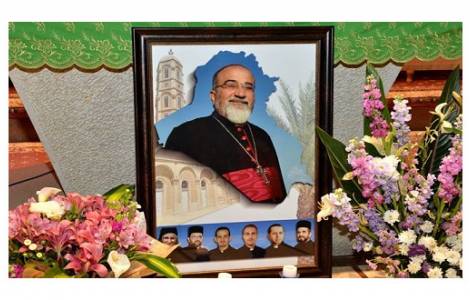 Baghdad (Agenzia Fides) - The process of canonization of the Chaldean Archbishop Paulos Faraj Rahho is proceeding "smoothly, and, God willing", the martyr Bishop will soon be declared blessed, "together with Father Raghiid Ganni, and his companions and Sister Cecilia of the Sacred Heart". With these words, Iraqi Cardinal Louis Raphael Sako, Patriarch of the Chaldean Church, tries to reassure all those who - in Iraq and the rest of the world - are waiting to see some martyrs raised to the honor of the altars, whose stories marked the recent journey of the indigenous Christian communities of Mesopotamia. The patriarchal "reassurances" were expressed on Monday, March 14, during the homily of the Divine Liturgy celebrated by Patriarch Sako on the 14th anniversary of Archbishop Rahho's death in the Patriarchate's chapel in Baghdad. Paulos Rahho, then Archbishop of Mosul, was kidnapped on February 29, 2008 by a squad of armed men who stopped the car he was driving in, instantly killing the driver and two of his companions. After days of intense negotiations for his release, his lifeless body was found on March 12 near an abandoned cemetery in Karama district. Since 2003, the city of Mosul has experienced an escalation of violence, crime and kidnapping in the aftermath of the military operation that led to the fall of Saddam Hussein's regime, with local Christian communities particularly hard hit. The Synod of Chaldean Bishops had already, at one of its sessions in September 2016, opened a process for the canonization of Archbishop Rahho and Sister Cecilia Moshi Hanna, who was killed in Baghdad in 2002, as well as Father Raghiid Ganni and the three deacons Basman Yousef Daud , Wahid Hanna Isho and Gassan Isam Bidawid, who died with him on June 3, 2007 in a terrorist attack on the Holy Spirit Church in Mosul. On 27 August 2019, Bishop Francis Kalabat, at the head of the Chaldean eparchy of St. Thomas the Apostle in Detroit (USA), signed the conclusion of the diocesan phase of the canonization processes. Files and documents collected during the diocesan phase of the processes were sent to the Congregation for the Causes of Saints. At the end of October 2019, Baghdad also completed the diocesan phase of beatification and declaration of martyrdom of the 48 servants of God who were killed in an attack on the Syrian Catholic Church in the Iraqi capital on October 31, 2010. (GV) (Agenzia Fides, 15/3/2022)