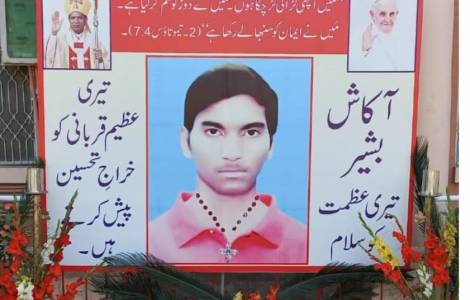 Lahore (Agenzia Fides) - "There is no greater love than giving one's life for one's friends. These are the words of Jesus, who was the first to give his life for his friends and we learn this from him. Akash Bashir, a young man, sacrificed his life for his brothers and sisters who prayed in Church. He discovered that there is something much greater than this earthly life. And he understood it without studying theology or philosophy. He lived a simple life, following Jesus every day, every moment, even when his hour was not expected. Akash did not know that his time had come, but what he did know was that his brothers and sisters, innocent believers, were in the Church and it was his responsibility to watch over them": with these words the Apostolic Nuncio to Pakistan, Archbishop Zakhia El Kassis, paid homage to Akash Bashir, the first Pakistani "Servant of God" in a Mass at the Sacred Heart Cathedral in Lahore, on March 15, 2022, which was attended by the Bishops of Pakistan and numerous priests, religious and faithful. As Fides learned, with this celebration the Archdiocese of Lahore launched the process of beatification of Akash Bashir, the young man who sacrificed himself on March 15, 2015 to stop a suicide bomber who wanted to massacre the faithful gathered at John's Catholic Church in Youhanabad, a suburb of Lahore.
The Apostolic Nuncio said: "It is impressive that a young man without thinking of himself, looking at the murderer, immediately rushed to stop him, and gave his life to save others. This process, initiated at the diocesan level, serves to discover what was hidden in the heart of this young man, to discover the virtues and beauty of his life and to discover Christ Jesus in his life". The Archbishop continued: "The story of Akash Bashir is a sign for all young people and for all of us who are called to be like Akash, that is, people who are not afraid to follow Jesus and nourish their hearts of God's love".
Msgr. Zakhia El Kassis reminded those present: "We do not know when the time will come to leave this earthly life, but the most important thing is to be ready, in every moment of our life, leaving a scent of Jesus Christ in our society, as Akash Bashir, faithful servant of Christ, did". "I truly wish to express my joy and give the blessing of the Holy Father Pope Francis who calls each of us to live a holy life, loving God and one’s neighbor", concluded the Apostolic Nuncio .
During the ceremony held before the Eucharistic celebration, the Archbishop of Lahore, Msgr. Sebastian Francis Shaw, signed the deed of constitution of the diocesan court which will carry out the course of the process. The members of the court, the episcopal delegate, the promoter of justice and the notary have signed and sworn an oath in which they undertake to carry out the assigned task, maintaining the secrecy of the information.
Congratulating all the faithful, and especially Akash Bashir's parents, Archbishop Shaw said: "Today we thank God for the faith and hope that Akash Bashir has placed in the Risen Lord, and for his great love for God. Although he knew his attacker was a suicide bomber, he chose to be faithful to the service he was performing. Akash Bashir decided to happily give his life for others. The young man - he said - is like a bright star, that shows us the way: he was faithful and obedient to his mission until his last breath".
The Archbishop then gave thanks for the work of Fr. Francis Gulzar, Vicar General of the Archdiocese of Lahore and parish priest of St. John's Church in Youhanabad, and the work of the Salesians who helped put together the initial documentation, as well as all those who played their part in launching the canonical process for the beatification of Akash Bashir, who was a student at the Don Bosco Technical Institute in Lahore. The Archdiocese of Lahore gave the news of Akash Bashir's proclamation as "Servant of God" on January 31, 2022 on the feast of St john Bosco. Akash Bashir was born on June 22, 1994 in Risalpur, in the Pakistani province of Khyber Pakhtun Khwa. His family emigrated to Youhanabad in Lahore, in 2009. He studied at the Don Bosco Technical Institute and was a volunteer member of the Parish Security Committee of the Church of St. John. Akash was on duty at the entrance gate of the church on March 15, 2015 and upon recognizing the terrorist, he blocked him saying: "I will die, but I will not let you enter the church". In the brutal terrorist attacks against two churches in Youhanabad (one Catholic and one Protestant) on March 15, 2015, 17 people were killed and 70 were injured. (AG-PA) (Agenzia Fides, 17/3/2022)