ASIA/LEBANON - "We are not celebrating two dead, but two risen in Christ". Lebanese Christians celebrate the beatification of Capuchins Leonardo Melki and Thomas Saleh, missionaries and martyrs 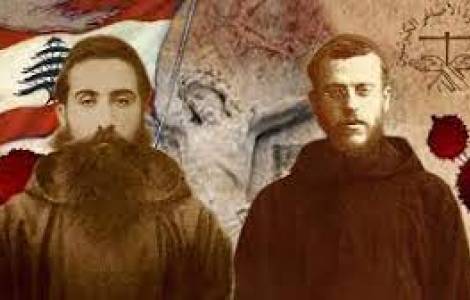 Beirut (Agenzia Fides) - The appointment is set for 6.30 p.m., Saturday June 4, at the convent of the Franciscan Sisters of the Cross in Jal el-Dib, a place known by all Lebanese also as the site of the first hospital for the mentally disabled born in Lebanon as a work of corporal mercy animated by Christian charity. It is there that the liturgy for the beatification of the two Lebanese martyrs, Leonardo Melki and Thomas Saleh, will take place, professed priests of the Order of Capuchin Friars Minor, killed in hatred of the Faith in Turkey, at the atrocious time that the Armenians call Medz Yeghern, the "Great Evil" marked by the systematic extermination of Armenians and other Christians perpetrated from 1915 in the Anatolian peninsula. The celebration of the beatification of the two martyrs will be presided over by Cardinal Marcello Semeraro, Prefect of the Congregation for the Causes of Saints. It was preceded by a week of meetings, prayer vigils, processions and concerts organized in the Land of Cedars to share with all the Lebanese people, in this difficult phase of their history, the sincere gratitude of the local Christian communities for the treasure of faith, hope and charity which shines in the experience of the martyrdom of the two new Blesseds. "Their martyrdom, remarked the Conventual Franciscan Bishop César Essayan, Apostolic Vicar of Beirut for Latin Rite Catholics, in an interview with Noursat TV, occurred more than a hundred years ago... Someone one might say: what do we have to do with it? And instead we are also interested in their acts of charity ... Even today we are called to recognize the work of the Holy Spirit who works in these acts of charity ... Charity is manifested in the offering of oneself for others, and this is not a human service, but comes from the Holy Spirit. Today, we do not celebrate two dead brothers, but two risen brothers in Christ, who show us the way to holiness".
The Servant of God Leonardo (born Youssef Houais) Melki was born in the Lebanese village of Baabdath (Metn region) in 1881, the seventh of eleven children. Attracted by the testimony of the Capuchin friars, he entered their Order, offering his vocation for the mission outside his native country. He completed his philosophical and theological studies at the convent of Bugià, near Smyrna, professed his solemn vows on July 2, 1903 and was ordained a priest on December 4, 1904.
Father Leonardo exercised his missionary apostolate (confessions, preaching, teaching and school management, youth ministry) in the towns of Mardin, Mamouret-ul-Aziz and Urfa. In December 1914, acts of violence and expulsion orders began against the Mardin missionary brothers. Father Leonard, so as not to leave a brother over eighty years old alone, decided not to leave the convent and was arrested on June 5, 1915. Tortured for days, he was then deported to Diyarbakir with 416 other men, including the Armenian Catholic Archbishop of Mardin Ignace Maloyan, already beatified. The deportees were all massacred along the way, and their bodies were thrown into wells and caves. The servant of God Thomas (born Géries) Saleh was also born in the Lebanese village of Baabdat, the fifth of six children, in May 1879. Thomas shared the same vocational and missionary journey as his confrere Léonard Melki. He received priestly ordination in 1904. His missionary life in the Anatolian peninsula took place mainly in the cities of Mardin, Kharput and Diyarbakir. In December 1914, he was expelled with one of his confreres and some sisters from the convent of Diyarbakir, and took refuge in the convent of Urfa. At the beginning of 1917, he was arrested with his confreres on the charge of having hidden an Armenian priest in the convent, to save him from certain death, and of possessing a weapon. Deported from place to place, he fell ill with typhus and died of deprivation and mistreatment at Marash, probably on January 18, 1917. On October 27, 2020, Pope Francis authorized the Congregation for the Causes of Saints to promulgate the decree concerning "the martyrdom of the servants of God Leonard Melki and Thomas Saleh, professed priests of the order of Capuchin Friars Minor; killed in hatred of the Faith in Turkey in 1915 and 1917". (GV) (Agenzia Fides, 3/6/2022)