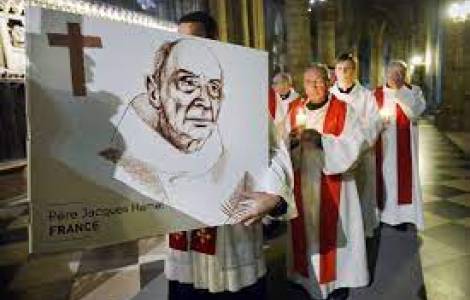 This year, as at the end of each year, Fides Service remembers the names and lives of the missionaries and people involved in the pastoral work of the Catholic Church (priests, men and women religious, lay people) who were killed in the twelve previous months. The 2016 report included the name of Father Jacques Hamel, whose throat was slaughtered in his church in Rouen, near the altar of the Eucharist, for whom the diocesan phase of the beatification process has already been completed, aimed at recognizing and proclaiming his martyrdom. In 2020, the end of Father Roberto Malgesini, the Lombardy priest who was stabbed to death by one of the countless people he helped with gratuitousness and gratitude, was reported. This year, the dossier edited by Stefano Lodigiani talks about Sister Marie-Sylvie Kavuke Vakatsuraki, the religious doctor murdered in the Democratic Republic of Congo by jihadist assailants who attacked the health center where she was preparing to operate on a woman.

Certainly, interesting historical, sociological and statistical considerations can be drawn from the annual reports on the murdered missionaries, published by Fides since the 1980s. But each year, what attracts the most attention are the brief biographical details of each of the victims and the scant number of details and circumstances of their violent deaths.

Most of them were assassinated not during high-risk missions, but while they were immersed and submerged in the ordinariness of their lives and their apostolic work, in the daily routine of the most habitual occupations and gestures, donated in forgetfulness of themselves and for the good of all, including – sometimes – their own executioners. Death has almost always come suddenly, caused by unmotivated violence. Sometimes, out of madness or out of ferocious ingratitude, their lives were ended by people who had only received care and laborious acts of charity from them.

«Oderunt me gratis», they hated me for no reason. Psalm 69 says it, with an expression also taken up by Jesus in the Gospel of John.
In all apostolic suffering there is a mystery of participation and conformation with the gratuitous passion of Christ. Even in the totally unmotivated brutality of so many missionary deaths there is a trace of the golden thread that binds their lives to the Passion and Resurrection of Christ.
These witnesses of the faith, murdered by occasional executioners, mysteriously apply Christ's salvation to the men and women of their time. That is why the Church - it should be repeated from time to time - has never protested for its martyrs. She has always celebrated them as victors, recognizing that they are comforted by Christ in his tribulations.

The lives of the witnesses whose memory Fides commemorates today does not make recriminations, does not hold their fate against others, as if it were a curse. They were not looking for martyrdom, they are not heralds of religious obstinacy. The gratuitousness of their given lives has blossomed to the point of the supreme offering as a miracle, as a reverberation of the consolation that Christ himself gives to those who suffer by bearing his name. They are witnesses: they testify to the surprising and gratuitous work that Jesus and his Spirit have really done in their lives. They are not "testimonials" that can be sponsored as promoters of an idea, of an ethical-spiritual belonging, or of mobilization campaigns, including those launched under the slogans of "defence" of Christians.

Looking at things from the threshold of gratuitousness, genetic consonance is perceived with more emotion and gratitude. The consoling elective affinity that unites in communion those who die on mission and all the baptized who live their apostolic vocation in the present time and in the given condition, without reaching the point of shedding blood. Both offer their bodies, make available the concreteness and carnality of their human condition so that the grace of the Lord, promise of Paradise, can act and shine in it. (Agenzia Fides, 30/12/2022)