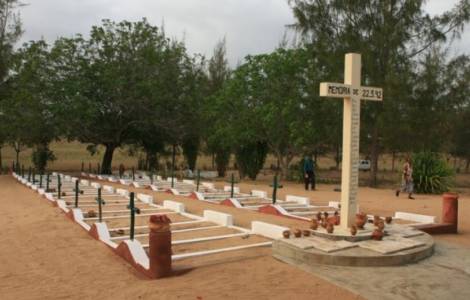 Guiúa (Agenzia Fides) - On March 23, thousands of faithful gathered in the Catechetical Center of Guiúa, diocese of Inhambane, for the conclusion of the diocesan phase of the process of Beatification and Canonization of a group of lay Mozambican catechists and their families, killed in hatred of the faith on 22 March 1992, while they were participating in a formation course in this diocesan Catechetical Center, managed by the Consolata Missionaries (IMC). This is the first cause of beatification whose diocesan phase began (25 March 2017, 25th anniversary of the massacre) and ended in Mozambique.
Father Osorio Citora Afonso, IMC, a Mozambican, remembers the heroic testimony of the martyred catechists and the scenario of the time (see Fides, 6/5/2009). "Following the Declaration of Independence in 1975, with the rise to power of the Mozambique Liberation Front, with its Marxist-Leninist ideology, a times of authentic persecution against the Church began, with expropriation, all kinds of restrictions on pastoral activity, refusal of visas for foreign missionaries.The Church was stripped of all she had and was. Many missions were forced to be abandoned by missionaries and priests. Many small Christian communities began springing up. These did not arise in the presence of missionary priests, but with the 'lay missionaries,' i.e. the catechists and animators from the Christian communities".
This is how the story of the catechists who heroically offered their lives for the Gospel between 1975 and 1992 begins. In addition to those who were formed in the Catechetical Center in Anchilo, and who carried out their missionary activity in the area of Nampula and who were killed in the mission camp, there were also those who were trained at the Catechetical Center of Guiua and were killed during their formation and preparation in the Center, for whom the cause of beatification began. There were about fifteen families, entire families with fathers, mothers and children, some still infants, hosted in the premises of the Center to attend the training course for a year that would have started the following day.
During the night the Renamo guerrillas attacked the dormitory and took men, women and children, in order to get information about their opponents of Frelimo, which they obviously did not get and therefore triggered their ferocity.
"The rebels brutally led the families from the Center, at three kilometers' distance, and after a painful interrogation began killing them all in a field. Other catechists, seeing that the situation was serious and impossible to change, asked permission to pray. After a few moments of prayer, the 23 catechists were killed. It was the night of March 22, 1992".
Since the time of the tragic events, the Mozambicans have called them "the Martyrs of Guiúa" and buried them in a double row along the path leading to the sanctuary of the "Queen of Martyrs", in which they periodically meet to reinvigorate their faith recalling the testimony given by the catechists. (SL) (Agenzia Fides, 4/9/2019)