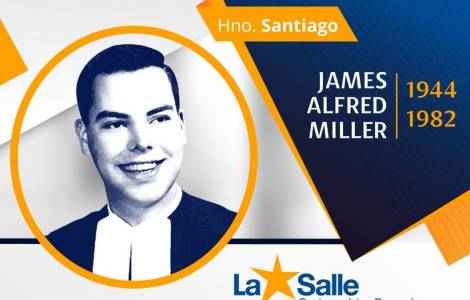 Huehuetenango (Agenzia Fides) - "A martyr, an excellent educator and evangelical defender of the poor and oppressed, who became one of us and for us gave his life": this is how Cardinal José Luis Lacunza Maestrojuán, Bishop of David (Panama), representing Pope Francis, described Brother James Alfred Miller, of the Lasallian Christian Brothers school, during the beatification celebrations that he presided over Saturday 7 December, in Huehuetenango, Guatemala, in the place of his martyrdom.
James Miller was born on September 21, 1944 in Ellis, a small town in Wisconsin, in the north of the United States. Outgoing, simple and enthusiastic, full of energy, tireless, in the Pacelli High School of Stevens Point, headed by the Lasallian Christian Brothers, his vocation matured. He joined the Lasallians in 1959, professed his religious vows in 1969, and wanted to go on a mission. Destined for Nicaragua, he remained there until 1980, giving proof to his abilities, also appreciated by the civil authorities. When President Somoza was dismissed, they called him back to the United States. At the beginning of 1981, his superiors agreed to his request to return to the mission, but they assigned him to Guatemala, in the city of Huehuetenango, at the Casa Indígena La Salle, a school for only those born in rural areas, very poor, of which he became Deputy Director. On the afternoon of February 13, 1982, while the children were preparing for the carnival party the next day, Brother James was fixing a lamppost outside the building. He had started, when three people arrived from a corner of the street. One of them shot him in the throat, chest and right side. He died immediately, and the killers heve never been found. Brother James Miller was beatified with a celebration on the soccer fields of the same school he once served in an impoverished pocket of rural Guatemala.
"The beatification of Brother James Miller is a source of great joy for the Brothers, collaborators, students and all members of the Lasallian Family - wrote in his message for the occasion Br. Robert Schieler, superior general -. His assassination was a useless attempt to extinguish the light of Christ and calls us to remember all the others - catechists, peasants, pastoral workers - whose life was shortened, because they tried to awaken people to the intrinsic dignity of daughters and children of God. Brother James worked hard for the well-being of the young people entrusted to his care, especially young indigenous people at risk".
"Catholic education belongs to the evangelizing mission of the Church" underlined Cardinal Lacunza Maestrojuán during the homily of the beatification, highlighting that the project and work of Blessed Miller "is a point of reference, both for the Lasallian community and for all Christian educators". "Hermano Santiago - as he was known -, through his pastoral work for indigenous peoples and the poorest of the poor, was aware of their dignity, their rights and their responsibilities, challenged the authoritarian and offensive system of those who thought only of themselves". (S.L.) (Agenzia Fides, 10/12/2019)