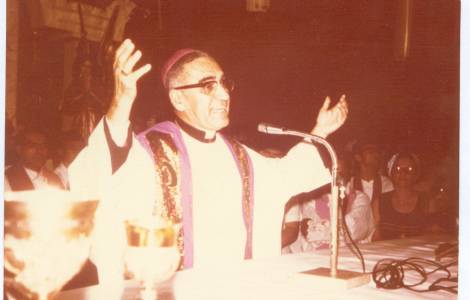 Rome (Agenzia Fides) - Stephen's witness, culminating in martyrdom, "is a source of inspiration for the renewal of our Christian communities. They are called to become increasingly missionary, all of them tending towards evangelization", said Pope Francis during the Angelus of the feast of St. Stephen, on December 26, 2019, inviting "to remember all the martyrs of yesterday and today, - nowadays they are many! - to feel in communion with them, and to ask them for the grace to live and die with the name of Jesus in our hearts and on our lips".
On the day of the liturgical feast of San Oscar Arnulfo Romero, the Archbishop of San Salvador assassinated 40 years ago while celebrating Mass, canonized by Pope Francis on 14 October 2018, the Pontifical Mission Societies invite us to remember the many missionaries who in the world were killed only because they announced Jesus Christ (see Fides, 23/3/2020).
A memory that does not want to be an arid list of names, dates, places, circumstances. Instead, it intends to transmit the spiritual heritage of many witnesses of faith, whose human events certainly do not find space in the international media networks, but must be "a source of inspiration for the renewal of our Christian communities, called to become increasingly missionary" as Pope francis points out. In this sort of prolonged Holy Saturday that Christians are experiencing in the world because of the coronavirus, where they are not called for celebrations, churches are empty and silent, even the testimony of these brothers and sisters killed for having witnessed the Gospel of Jesus Christ, who died and rose for our salvation, can support us to confidently await the dawn of the new day, the Easter of the Resurrection, which they already live in fullness.
Annually, Fides Agency collects information relating to missionaries killed during the year, using the term "missionary" for all the baptized. Of some of them, as frequently happens, the Church will be able to recognize the "martyrdom" after careful consideration, opening the way for beatification and canonization.
According to data collected by Fides, during the year 2019, 29 missionaries were killed in the world, mostly priests: 18 priests, 1 permanent deacon, 2 religious non-priests, 2 nuns, 6 lay faithful. After eight consecutive years in which the highest number of missionaries killed had been registered in America, Africa has been at the top of this tragic ranking since 2018. In Africa, 12 priests were killed in 2019, 1 religious, 1 nun, 1 lay woman (15). In America 6 priests were killed, 1 permanent deacon, 1 religious, 4 lay faithful (12). In Asia, 1 lay woman was killed. In Europe, 1 nun was killed.
In the decade 1980-1989, 115 missionaries died violently. However, this figure is undoubtedly at fault since it refers only to the cases ascertained and of whom there was news. The summary of the years 1990-2000 presents a total of 604 missionaries killed, considering that the genocide in Rwanda (1994) caused at least 248 victims among the ecclesiastical staff. In the years 2001-2019 the total number of pastoral workers killed was 485. (SL) (Agenzia Fides, 24/3/2020)