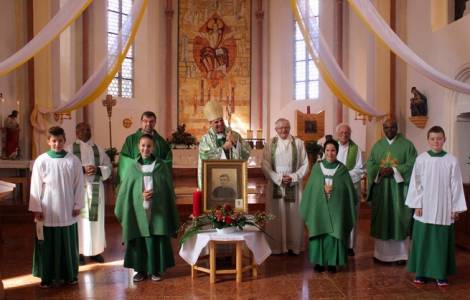 Wurmannsquick - (Agenzia Fides) - One of the first German-speaking Salesian missionaries, Fr. Josef Thannhuber (1880-1920), was remembered in his hometown, Wurmannsquick, diocese of Passau, in Bavaria, 100 years after his martyrdom, which took place in Brazil, in Mato Grosso, on August 29, 1920.
According to news released by the ANS agency, Father Tannhunber, who went to Brazil as a missionary in 1903, was shot on August 29, 1920 by a bandit, who attacked the mission station. Father Thannhuber had previously offered his life for the other missionaries. Even if the case has never been completely resolved, it is assumed that the reason for the violence against the priest lay in the differences on land issues, with the Salesians committed to defending the rights of indigenous peoples.
Bishop Stefan Oster von Passau, also a Salesian of Don Bosco, during the memorial service described Father Thannhuber as a role model: Today, men, women, young people are needed in the church "who learn from him to be missionaries, wherever we are, to be witnesses of the love of Christ". (SL) (Agenzia Fides, 5/10/2020)