VATICAN - Pope Francis: “The Church is Church if she is a Church of martyrs” 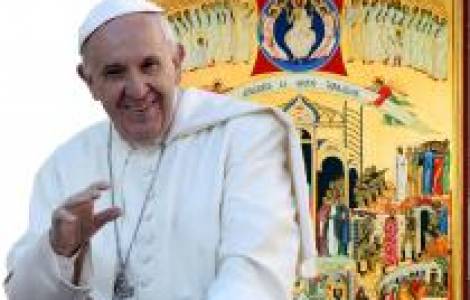 Roma (Agenzia Fides) – “The memory of these heroic, early and recent witnesses confirms us in the awareness that the Church is a Church of martyrs… and martyrs are those who had the grace to confess Jesus until the end, until death. They suffered, they gave their lives, and we receive the blessing of God for their witness”. This was said by the Holy Father Francis during a Liturgy of the Word in memory of the New Martyrs of the 20th and 21st centuries, which he presided in the afternoon of Saturday 22 April in the Basilica of St Bartholomew on the Tiber Island in Rome, looked after by the S. Egidio Community, and which has become a memorial to all New Martyrs, and has the custody of several relics.
The Pope continued: “there are also many hidden martyrs, those men and women who are faithful to the gentle strength of love, to the voice of the Holy Spirit, those who in their daily lives seek to help their brothers and sisters and to love God without reserve.” The cause of every persecution, he said, lies in “the hatred of the prince of this world toward those who have been saved and redeemed by Jesus through His death and resurrection. “
Asking himself what is the most urgent need for the Church today, the Holy Father continued: “Martyrs, witnesses, that is, everyday saints of ordinary life, lives lived coherently; but we also need those who have the courage to accept the grace to be witnesses until the end, until death. All these are the living blood of the Church. They are the witnesses who carry forward the Church; those who witness to the fact that Jesus is risen, that Jesus is alive, who witness to Him with coherent lives and with the strength of the Holy Spirit they have received as a gift.”.
The Pope concluded “ Remembering these witnesses of the faith and praying in this place is a great gift. It is a gift for the Community of Sant'Egidio, for the Church in Rome, for all the Christian communities of this city, and for so many pilgrims. The living legacy of martyrs today gives us peace and unity. They teach us that with the strength of love, with gentleness, one can fight against arrogance, violence, and war - and that peace can be achieved with patience ”. (SL) (Agenzia Fides 24/04/2017)