AMERICA/EL SALVADOR - Massacre of Jesuits: Film reconstructs what happened in 1989 and what is still happening today 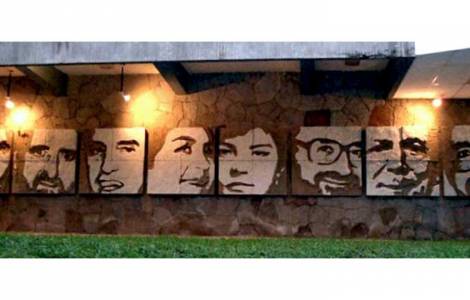 Madrid (Agenzia Fides) - On the morning of November 16, 1989, in the midst of the Salvadoran civil war, six Jesuit priests, university professors and two office workers were murdered at the José Simeón Cañas Central American University (UCA) in San Salvador. The killings attracted international attention because among the victims was a well-known intellectual, Ignacio Ellacuría. The position of the Jesuits of the UCA was central to mediating a peace agreement and ending a decade of bloody conflict. The government initially accused the FMLN guerrilla fighters of the crime, but an eyewitness disputed the official version. Her name is Lucía Barrera de Cerna and she worked as a cleaner at the UCA.
She had seen the real killers: they are army soldiers. Her testimony was to be the key to solving the crime, but it was also to change her life and that of her family forever. Thirty years later, in 2020, the Supreme Court of Madrid sentenced former Colonel and Deputy Minister Inocente Orlando Montano Morales to 133 years and 4 months in prison for being one of the instigators and executors of the massacre committed by the Salvadoran Armed Forces (see Fides, 12/9/2020).
“They arrived at night” is the title of Imanol Uribe's new film on the massacre of the Jesuits, based on the testimony of Lucia, the only witness to the crime, which will be released on March 25 in cinemas.
The film was shot between Spain and Colombia, deals with events that shocked an entire generation and describes characters and people as they struggle for truth and justice in a country at war. The film was made with the consent of the Society of Jesus, who have been following the production for the past few months. "We welcomed Uribe's idea of making this film with great enthusiasm," said Father Antonio España, Provincial Superior of the Jesuits in Spain. "The important thing about the project is that it invites us to remember. Not to forget what happened in 1989 and what is happening in many places in Latin America and Central America, which is the persistent experience of injustice and violence and to which the Society of Jesus is still trying to react with its institutions in these countries", he emphasizes in this context. (SL) (Agenzia Fides, 27/1/2022)