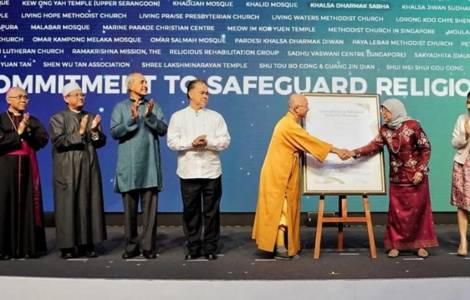 Singapore (Agenzia Fides) - The first Cardinal of Singapore, Archbishop William Goh, assures that he will promote religious harmony in Asia by strengthening dialogue between different religions. "Interreligious dialogue - he observes - means interacting with people beyond religious borders to collaborate and promote peace in society, in Asia and in the world. It is part of the evangelizing mission of the Church in a complex reality like Asia".
Cardinal Goh, one of the 20 new Cardinals formally created by Pope Francis at the Vatican on August 27, explains to Fides that the Archdiocese of Singapore will create a special research institute to study methodologies on how to promote friendship with others religious leaders to later share them with the bishops of the Asian continent. In the past, the Asian bishops have asked the Catholic Church of Singapore for suggestions, advice and good practices to live pluralism and dialogue with different religions in a fruitful way.
Archbishop Goh points out that "the work of interreligious dialogue is carried out thanks to a patient weaving of human and spiritual relationships." In addition, institutional support is important: "The Singapore government is also keen to promote unity by offering its support without being the body that promotes or guides the process". "The government sees us as a partner because, in the end, we help build a better society. We want to live a harmonious life in Singapore. We work with the government in recognizing common values and the government respects us. We respect the government because, after all, religion is not involved in politics", he says. "The Church does not look down on other religions and does not seek political power, but cooperates and collaborates with civil institutions", he explains.
Archbishop Goh's creation as cardinal came as the diocese of Singapore celebrates its 200th anniversary of evangelization. Explaining how the baptized can be builders of dialogue and peace, the Cardinal affirms: "Religious leaders maintain excellent relationships, we respect and support each other. We may not share the same convictions, but at least we share the same universal values of love, justice, peace and harmony. We live these values with the spirit of Christ, which is the source".
And he continues: "Singapore is a religious nation, in which 80% of its population profess a faith, but we are a secular state. We must not take religious harmony in our country for granted and we must ensure that religious leaders remain moderate and respectful of one another, setting an example for the faithful".
"On an individual level - he points out - we should encourage Catholics to know the religions of others, but interreligious dialogue is for people who are passionate and mature in their faith. You cannot dialogue with others if you do not know your own faith". With this spirit one can be "authentic witnesses of Christ with people of other faiths", he concludes.
Singapore is a multi-religious and multi-ethnic nation with an estimated population of 5.7 million. Most Chinese are Buddhists and most Malaysians are Muslims. Christians represent about 15% of the population. The Archdiocese of Singapore, which covers the entire island, has some 360,000 Catholics, divided into 32 parishes. (SD/PA) (Agenzia Fides, 30/8/2022)