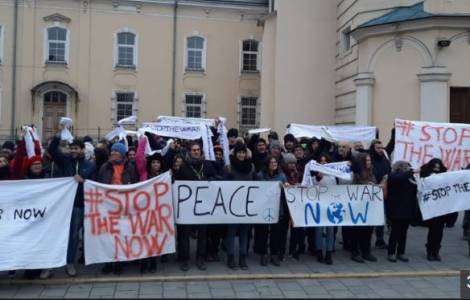 Assisi (Agenzia Fides) - "After the peace march in Lviv, where we went to bring aid and families in need back to Italy, we are thinking of Russia. A new entity is being formed, "StoptheWarNow", which intends to gather all the non-violent movement that is not satisfied with demonstrating against the war but thinks of real actions, of 'peaceful invasions' that can respond to the need of those who want to stop the conflict now". This is what Fr. Tonio dell'Olio, historical figure of the peace movement and president of "Pro Civitate Christiana", the Assisi association whose goal is to offer "reception and opportunities, lymph and breath, mission and service", explains to Fides. Dell'Olio, former national coordinator of "Pax Christi", recalls historical actions such as the journey for peace made in Sarajevo by a large delegation led by Fr. Tonino Bello (1935-1993), former Bishop of Molfetta declared Venerable, whose beatification process is underway. Fr. Dell’Olio, who recently returned to Italy after the peace march in Lviv (see Fides, 2/4/2022 and 4/4/2022) says: "Just walking is no longer enough". According to Dell'Olio, civil society in Italy and in Europe in recent years hve made a qualitative leap in the culture of peace and today is opposed to a logic of war "which passes from the increase throughout Europe of military spending which then means a new re-armament race". "In addition to re-armament - he warns - there is also a cultural element, a logic according to which 'my neighbor can be my enemy', and the fear of being attacked can turn, as has already happened, into aggression. It is a culture that is added to psychological aspects and prepares the ground for the umpteenth war, which is no longer defined by its name but with semantic camouflages such as 'peacekeeping' or 'humanitarian interference'. However, European civil society has been able to change some paradigms: aid and assistance were previously seen only as support for the populations, as if a conflict were equal to a natural catastrophe, an earthquake or a flood. War, on the other hand, can be avoided and this is only possible if we look to the future and work to totally change the approach to conflicts and oppose this message, which surreptitiously arrives with re-armament".
Dell’Olio continues: "Re-armament is the opposite of dialogue. Moreover, in Italy Fr. Milani already reminded us that, after the Second World War, there were no more wars to defend the national territory. This is why there was then the deception of the so-called 'peacekeeping missions' which in reality were wars. Civil society can and must play a role - Dell’Olio concludes - because since the Second World War there has no longer been fighting only between armies but among the people and in modern conflicts nine out of ten victims are civilians. This is why we must first of all speak to our Ukrainian and Russian brothers, and with them play an active role in stopping the conflict". (EG/PA) (Agenzia Fides, 13/4/2022)