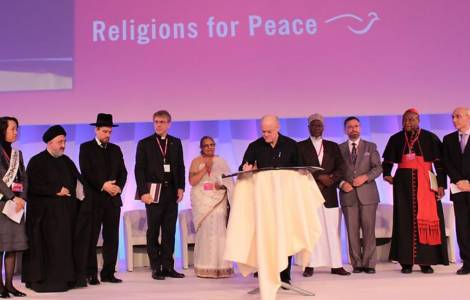 Warsaw (Agenzia Fides) - An interreligious prayer and a moment of silence together to invoke peace in Ukraine: this is the initiative promoted for tomorrow, March 24, by the international association "Religions for Peace" in collaboration with the "Patient Association", based in Poland, with the aim of ensuring support and solidarity, by believers of different religious denominations, to people affected by the humanitarian crisis resulting from the war in Ukraine. A note from "Religions for Peace", sent to Agenzia Fides, says: "The first part of this journey is to raise a common prayer for peace, shared by representatives of different faiths: prayer and silence will be experienced simultaneously, on a virtual level, in many parts of the world, by groups who cannot meet in person; in other places, groups of people of goodwill will come together to share a moment of silence and invocation to God, expressing closeness of mind and heart with the people of Ukraine". The next step, it is announced, is to organize the trip of a delegation of religious leaders and a meeting in Kiev so that "with their prayerful and peaceful presence, they can invite the warring parties to begin a truce and take part in concrete negotiations". The religious leaders, it is pointed out, "do nothing but advocate a peaceful resolution of the conflict and the reconciliation of peoples". "All believers in Europe, whatever their religious community, are called to join in this effort to stop the sound of arms and eradicate hatred from the hearts of the people", the note hopes.
In recent days, members of the International Youth Committee of "Religions for Peace" also wrote a message "condemning the violence and loss of life, disregard for the law and disregard for human rights", saying they are "deeply disturbed by this situation, especially for young people who are deprived of a peaceful future".
"Without a path towards peace and diplomacy, the wounds of this conflict will only perpetuate an endless cycle of violence and trauma", warns the Committee, made up of young people of different religions, which calls for "an immediate cessation of hostilities and the commitment of political and religious leaders to resolve this war and prevent further violence in the future. (PA) (Agenzia Fides, 23/3/2022)