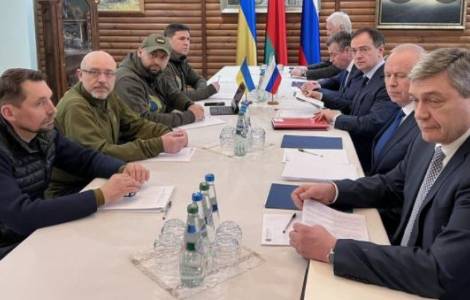 Milan (Agenzia Fides) - "We have reached a point where the respect due to the thousands of dead and the pain of so many families, both Ukrainian and Russian, absolutely demand a peaceful solution. In the negotiations it is crucial to give to each of the contenders the chance to give his people at least 'the impression of having won'. It is now urgent to find a way out". This is the conviction of Fr. Edoardo Canetta, former Vicar Apostolic of Central Asia, and former professor at the Institute of Diplomacy of the Republic of Kazakhstan. Father Canetta was a missionary in Kazakhstan for twenty years (including five as Vicar General of Central Asia), where he taught at the University of Karaganda, then at the Eurasian Gumylyov National University in Astana. Today, parish priest in Milan and professor at the Ambrosiana Academy in Milan, with a deep knowledge of the Russian language, culture and mentality, he points out to Agenzia Fides a possible way for a peace negotiation between Russia and Ukraine: "A plausible negotiation between Russia and Ukraine – argues Fr. Canetta - could start from the treaty signed on May 15, 1992, and reiterated in Astana in 2002 and known as "Dogvavor o collektivoi bezopasnosti" ("Treaty on collective security") stipulated by the Russian Federation with certain countries of the former Soviet Union, in Central Asia". This treaty establishes a military alliance which reaffirms the commitment of its members to renounce the threat or use of force to settle disputes between them; it also introduces a solidarity clause in the event of an attack by outside countries. Since 2002, in application of the treaty, the organization has equipped itself with common military infrastructures and organizes "training sessions". The countries of the organization (CSTO) - notes the priest - were involved in finding a solution to appease the unrest in Kazakhstan, which was provoked by "foreign agents", according to President Tokay. A current basis for negotiation between Russia and Ukraine could well be a treaty that, on the model of the 2002 Dogvavor, Ukraine could sign with other countries while renouncing NATO membership. This treaty was wanted and stipulated by Putin himself and, therefore, - notes Don Canetta - could be presented as a solution that, at least in part, Putin himself inspired.
"The question would then arise as to which countries would join the new defense treaty, guaranteeing the security of Ukraine. And if it were the United States and the Russian Federation, with the participation of the European Community? It would be a historic peace initiative guaranteed simultaneously by the USA and Russia, signed by two Christian leaders, a Catholic like Biden and an Orthodox like Putin", continues the former Vicar of Central Asia. "The slogan to carry this idea forward could be the Gospel slogan: Love your enemies", hopes the priest. Don Canetta points out that "beyond the differences in idioms and, to some extent, in the alphabet, there is a great common history in the culture of Russia and Ukraine. We cannot forget what unites these peoples and, precisely for this reason, we can appeal to mutual respect as it should be between two true friends. Russians and Ukrainians have an ancient, common, great Christian tradition which has often united them in the defense of this identity: think of the struggles against the Ottoman Empire and the resistance against the Nazi invasion. We must return to this heritage in order to embark on a true path of pacification and reconciliation". (PA) (Agenzia Fides, 28/3/2022)