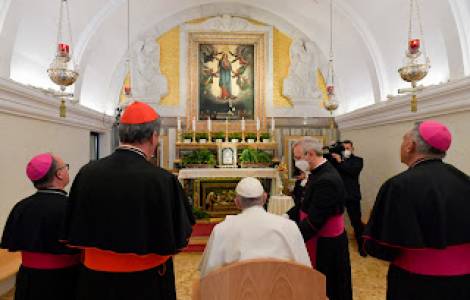 2022-04-04
Pope Francis: The mission of the Church always begins again as a "new start" and a "return to the sources"

2018-04-12
Appointment of the National Director of the PMS, Mgr. Valentino Borg

Gozo (Agenzia Fides) - "The joy of the Church is to evangelize". And faith in Christ and the same apostolic mission entrusted to the Church can only be renewed and persevere over time if the experience of the first encounter with Jesus is reproduced in the life of the baptized and of the ecclesial communities. A gratuitous renewal that is always configured as a "new beginning" and a "return to origins", and which has as perennial paradigms the encounters and events of the "nascent Church" recounted in the Gospel and in the Acts of the Apostles. These are the evocative formulas with which Pope Francis reproposed to the whole Church the exclusive sources that can cultivate all authentic missionary dynamism, shaping its own forms and making them incomparable to any project of political, cultural and religious mobilization. He did so on the afternoon of Saturday April 2, within the framework of the prayer meeting organized on the island of Gozo, at the National Shrine of Ta' Pinu, on the first day of his brief but intense apostolic visit to Malta. In his reflection outside the small Maltese Shrine, in front of more than three thousand people, the Bishop of Rome drew inspiration from the story of Christ's passion, dwelling on the passage from the Gospel of John which depicts the Virgin Mary and the beloved Apostle at the foot of the Cross on which Jesus hangs. The hour of Jesus' death on the Cross - remarked the Pope in introducing his reflection - "does not represent the conclusion of history, but marks the beginning of a new life". At the foot of the Cross, when Jesus entrusts the apostle John to his Mother, "the time of the Church that is born begins. From this original cell, the Lord will gather a people who will continue to cross the impervious roads of history, carrying in their hearts the consolation of the Spirit, with which they will dry the tears of humanity". And "to renew our faith and the mission of the community", the Pope stressed, "we are called to return to that beginning, to the nascent Church that we see on the cross in Mary and John".
Returning to the sources of the nascent Church - the Pope specified - means "rediscovering the essentials of the faith", and this has nothing to do with an idealized archeology or the pretension to reconstruct "the ecclesial model of the first community Christian". We cannot "skip history", as if the Lord had not also spoken and done great things in the life of the Church in the following centuries". On the contrary, to return to the sources means to return to the heart and rediscovering the center of faith: the relationship with Jesus and the proclamation of his Gospel to the whole world". Only the renewal of the real encounter with the risen Jesus can revive the same attraction of grace that animated the first disciples, like Mary Magdalene and John, who - recalls the Successor of Peter - after seeing the empty tomb, "without losing time, with anxious hearts, ran to announce the good news of the Resurrection". Only the effective attraction of the encounter with the risen Christ animated the first disciples to announce his Resurrection every day, tirelessly, in the temple and in their homes. "The joy of the Church is to evangelize", repeated the Pope several times, using this formula to punctuate the various passages of his homily. Only this attraction of joy can free the ecclesial dynamics from the temptation of self-referentiality, following the example of the Apostles, whose only concern was not to increase "the prestige of the community and of its ministers, social influence, the refinement of worship". No. The concern which animated them was the proclamation and the testimony of the Gospel of Christ". The life of the Church, Pope Francis continued, is never just "past history to remember". And she is not called upon to censor any fact of reality. The crisis of faith, the apathy of believing practices, especially in the post-pandemic, and the indifference of so many young people to the presence of God, the Sovereign Pontiff remarked, are not subjects that we must "soften ". Even in the face of the loss of Christian memory, trust cannot be placed in re-evangelization projects or training courses. The present time, insisted the bishop of Rome, is also the time when it is better to return to the beginning, to the cross, to the first Christian community. In order to be a Church that cares about friendship with Jesus and the proclamation of his Gospel, and not about seeking space and attention". And on this path, the Pope suggested, there is a sort of "decisive test" useful for verifying "to what extent the Church is imbued with the spirit of the Gospel": it is the concern for reciprocal acceptance, "not by pure formality but in the name of the Christ", modeled on the image of Mary and the Apostle John who entrusted themselves to each other at the foot of the cross, accepting the last words that Christ himself addressed to them. "Mary and John" the Pope pointed out, looking at the collective human tragedies of the present moment in the light of the Gospel, "are welcomed not in the warm refuge of the cenacle, but at the cross, in that dark place where one was condemned and crucified as evildoers. And we too cannot welcome each other only among ourselves, in the shadow of our beautiful churches, while outside so many brothers and sisters suffer and are crucified by pain, misery, poverty and violence". (GV) (Agenzia Fides, 4/4/2022)

AFRICA/EGYPT - Patriarch Tawadros II on the Feast of the Entry of the Holy Family: “A Blessing for the Country”