AFRICA/GAMBIA - Hopes for reconciliation and development after the elections 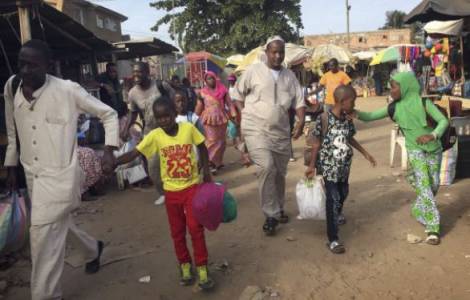 2021-12-10
Hopes for reconciliation and development after the elections

2017-01-10
Pressure on President Jammeh so that he cedes power, "but no use of force", says the Bishop of Ziguinchor

Banjul (Agenzia Fides) - "As a Catholic Church we have observed the electoral process very closely, and after the first few days we can say that it was democratic and that the rules were respected. Observers such as the Economic Community of West African States, the African Union and other institutions confirm that there were no irregularities. With 53.2% of the vote, Adama Barrow is again President of Gambia for the next five years", said the General Secretary of the Bishops' Conference of Gambia and Sierra Leone Father Paul Morana Sandi, to Fides on the election held on 4 December. Adama Barrow has won the election for the second time in a row in the smallest African continental state. The turnout was very high, over 89%, a sign of the people's enthusiasm for politics today after more than 22 years under the dictatorship of Yahia Jammeh. Father Paul Morana Sandi remarks: "The situation in our country remains critical; the office that Barrow assumed five years ago after 22 years of dictatorship was an enormous challenge. Many fled Gambia because of both poverty and repression. A coalition was initially formed to create a government but, over time, various parties withdrew due to internal political problems. Now people are hoping that public services such as schools, hospitals and transportation will improve. The cost of living is falling and honest and committed politicians are finally standing up for development opportunities and contributing to the common good. The main thing is to strive for the reunification of the country, as there are still too many divisions, and to promote social cohesion". After the official election results were published, there were initially protests. In particular, opposition leader Ousainou Darboe, who finished second with 27.7% of the vote, has announced his intention to appeal. At the same time, however, he called on his supporters to calm down after demonstrations with minor incidents. "There were six candidates, three of whom have already challenged the election and asked for checks. There will be a re-examination and we will see what the electoral commission decides. In any case, it is important that we start rebuilding the country as soon as possible - think, for example, of the young people, many of whom are leaving Gambia to make their way to Europe, at the risk of dying, many of whom continue to venture across the Sahara and across the Mediterranean Sea. The phenomenon continues despite the efforts of States in the region to denounce how dangerous these journeys are and discourage young people from doing so, many of whom have already returned home and others who acknowledge and document the dangerous nature of the dramatic journey experiences in video.
This is how awareness is created. These efforts were made through campaigns in Gambia and Sierra Leone, Liberia and Senegal, also thanks to the intervention of the West African Bishops' Conferences (Recowa)". In this small country with a large Muslim majority, the role of the Church is changing: "The Church in Gambia - concludes Father Morana Sandi - is undoubtedly a small reality, but it is present and deeply rooted in the country. After the resignation of the previous bishop, Monsignor Gabriel Mendy, the first Gambian bishop, was appointed bishop of Banjul, the only diocese in Gambia. The Church plays an important role in evangelization and is also a voice present in the public sphere. It contributes to the revision of the constitution, is part of the Interreligious Council and works daily for reconciliation. Building on the tradition of missionaries who brought the seeds of the gospel, the Catholic community strives to spread the Christian message and promote social action, cohesion and development". (LA) (Agenzia Fides, 10/12/2021)