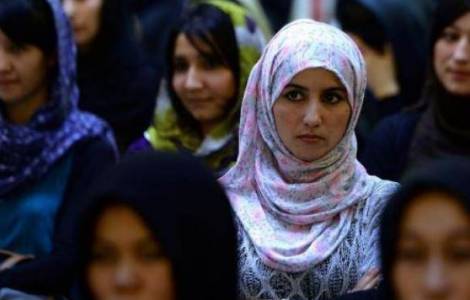 Kabul (Agenzia Fides) - Nargis Nehan, director of the non-governmental organization "Equality for Peace and Democracy" is concerned. "With the withdrawal of troops, it seems that civil society is no longer as useful to the international community as it was before".
Former Minister for Oil and Natural Resources, a well-known face of activism in the Afghan capital, Ms. Nehan notes that the military disengagement is accompanied by a diplomatic and financial disengagement. On April 14, 2021, US President Joe Biden announced that the unconditional withdrawal of US troops will take place by September 11, 2021.
The same applies to countries that contribute with their armies to the NATO mission. Evacuation plans are drawn up in foreign embassies. Donors appear more reluctant to support new projects. "We are not involved enough in high-level discussions", Nehan complains. Often, she argues, "Afghan women are only called upon to talk about women's rights, but we have ideas on everything from the peace process to the regional setting". Provided for by the bilateral agreement between the US and the Taliban in February 2020, the intra-Afghan negotiations, between the Taliban and the republican front, began only in September 2020. It did not produce significant results. The Taliban deserted a UN conference scheduled for last April in Turkey, on the pretext that the date chosen by Biden for the complete withdrawal postponed by 4 months had been agreed in Doha. Since then, the violence has intensified. "This is the first time in twenty years that I feel really threatened". This is Najba Ayoubi, journalist, director of "The Killid Radio", an independent Afghan radio network with offices in eight provinces of the country, told Fides. In recent months there have been numerous targeted killings of journalists, members of civil society, judges, government officials. No group claims responsibility for these murders. Violence is also increasing on the military front, with the Taliban conquering new districts and the government concentrated on protecting the provincial capitals. For Najiba Ayoubi "when we start negotiations, the first step should be to agree to a ceasefire. Only afterwards we can negotiate". Instead, the Taliban would chose "the wrong path. They want to come to power by force". For Najiba Ayoubi, it remains important to find a political agreement between the government of Kabul and the Taliban. But she notes that "signing a document will not produce peace". "The political process is important, but without social peace there will always be other conflicts. Here there is a society that has been at war for 40 years. Many families ask for justice". If the demands for justice are not met, the war will continue", concludes The Killid Radio director. (GB-PA) (Agenzia Fides, 14/6/2021)

ASIA/AFGHANISTAN - Civil society leaders: violence increases, a UN mission is urgently needed to ascertain the truth about the attacks