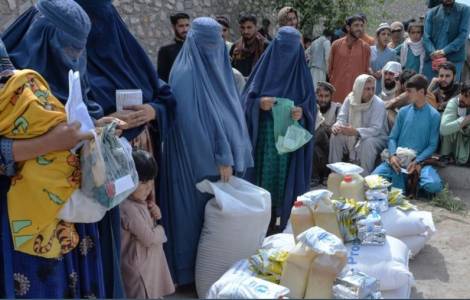 Trento (Agenzia Fides) - "About 23 million people are in dire need of food in Afghanistan, a fact that could lead to the death of a million children by the end of this winter in what the UN World Food Program has described as hell on earth". Giovanni Visone, from the NGO “Interos”, speaking on behalf of “Link 2007”, coalition of Italian NGOs, described the serious crisis in the Asian country during a debate on the future of the country that took place in Trento on December 14, organized by two associations of the Italian autonomous Province, "46mo Parallelo" and "Afgana".
The freezing of international funds is strangling the country, said Visone, recalling that today the international community is represented in the country only by the humanitarian community. The number of people identified by the UN as "in need of humanitarian aid" went from 3.3 million in 2018 to 18.5 million in 2021. The Afghan crisis has worsened, despite the fact that fighting has ceased, largely since the Taliban took power in August. But aid is slow in coming, there is no liquidity to pay the salaries of officials and the Afghanis, the national currency, has lost more than half its value, which has caused the price of basic necessities to skyrocket.
While in Italy and Europe, as well as in several countries that make up the NATO coalition, present in Afghanistan for 20 years, the debate continues on one of the deepest crises that the country is going through, exhausted by more than 40 years of war (which began with the invasion of the USSR in 1979), the same concerns come directly from the United Nations, charged by the international community to deal with the crisis. Afghans "today face a profound humanitarian crisis" that also threatens basic "human rights", according to the UN Deputy High Commissioner for Human Rights, Nada Al-Nashif, in recent days: "Economic life is largely paralyzed by the collapse of the banking system and a severe liquidity crisis. With the arrival of winter, women, men, boys and girls face severe poverty and hunger and limited public services - particularly health care - while more and more Afghans struggle to meet their basic needs, and vulnerable people - particularly female-headed households - take desperate measures, such as child labor, marriage of children to guarantee their survival and - according to some reports - even the sale of their children".
However, the central point of the debate is not only humanitarian emergency aid, but, according to the UN official, a situation "aggravated by the impact of sanctions and the freezing of state assets". The reference is both to the loans of the World Bank and the Monetary Fund (which have been partially unblocked) and, above all, to the 10 billion dollars of the previous Republican government frozen in US banks. In addition to the humanitarian and economic crisis, the UN is also concerned about the extrajudicial executions that, between August and November, allegedly involved "on the basis of credible accusations" more than 100 murders of former members of the Afghan National Security Forces and other government collaborators. "At least 72 victims have been attributed to the Taliban", while other summary executions allegedly took place for alleged members of the Islamic State Khorasan Province, the Afghan branch of the now defeated Islamic State of Raqqa.
"Amnesty International" also intervened in this whole affair, which involves serious human rights violations and war crimes both now and in the past. In a recently released report ("No Escape: War Crimes and Civilian Harm During the Fall of Afghanistan to the Taliban") the NGO states that "repeated war crimes and the relentless bloodshed "marked the collapse of the previous government. The report adds that all parties to the conflict are responsible for war crimes in Afghanistan. This is why Amnesty calls on the International Criminal Court (ICC) to investigate all alleged war crimes in Afghanistan, including those committed by US forces and Afghan security forces. (MG-PA) (Agenzia Fides, 17/12/2021)

ASIA/INDIA - Fight against poverty and hunger in India: between good results and necessary commitments