ASIA/AFGHANISTAN - The Barnabites, with their hearts in Kabul: "Pray for Afghanistan" 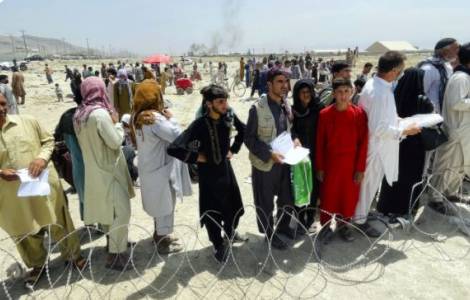 Rome (Agenzia Fides) - The interruption, after a century, of the Barnabite mission in Kabul, has not put an end to the commitment and attention of the CLERICS REGULAR of St. Paul (the Barnabites) in Afghanistan. The message sent to Fides by Fr. Giovanni Scalese, responsible for the Missio sui iuris in Afghanistan, who returned to Italy following the political crisis in the country, which broke out last August, after the Taliban took power: "I send you my Christmas greetings with the same image and the same evangelical quote which I used seven years ago, in 2014, when I was about to leave for Kabul. This year, having forcibly returned to Italy, I can repeat with the Magi: 'We have seen his star in the East!'. Merry Christmas! Pray for Afghanistan!".
Fr Scalese, the only Catholic priest in Afghan territory, was repatriated last August 25, precisely in the most critical days of the evacuation of Westerners from Kabul. Even at that stage, he had strongly expressed the need to pray for the nation: "Mission accomplished. I arrived this afternoon at Fiumicino airport with 5 nuns and 14 disabled children they looked after in Kabul. We thank the Lord for the success of the operation. And I also thank all of you who in these days prayed for us. Continue to pray for Afghanistan and its people". The repatriation operation, organized by the Farnesina, also involved the local staff of the Pro Bambini Association of Kabul (PBK), which ran a day center for disabled children in the Afghan capital. Thanks to the commitment of the Barnabites and the Italian detachment of the association, the Afghans who arrived in Rome were welcomed by various religious congregations, who did not hesitate to open the doors of their homes to refugees. Currently, the association is committed to trying to reunite members of families who have come to Italy separately in the hectic days at the end of August. It was 1921 when King Amanullah agreed to requests for Catholic religious assistance from Western diplomats. Italy, one of the first countries to politically recognize the independence of Afghanistan from England, was immediately involved: Pius XI therefore decided to entrust the mission to the Barnabites. An agreement was stipulated between the Afghan and Italian governments and the Holy See, which has never been revoked over the years, which included only one real condition: avoiding any form of proselytism among the local population, almost all Muslims. In 2002, what was initially a simple spiritual assistance within an embassy, was elevated to Missio sui iuris by John Paul II. (LF-PA) (Agenzia Fides, 18/12/2021)

ASIA/CHINA - Christmas time for Chinese Catholics. When the light of Jesus crosses the days of pain