ASIA/MYANMAR - Urban warfare and another church hit in Kayah: resistance is being prepared 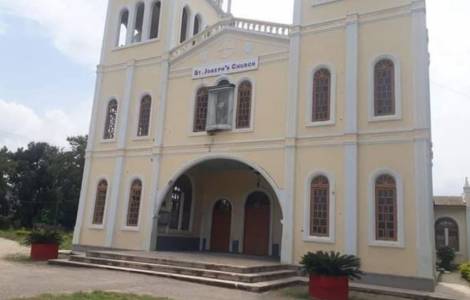 Loikaw (Agenzia Fides) - Some rockets fired by the soldiers of the Burmese regular army hit the Catholic church of St. Joseph in the city of Demoso, in the Kayah state, in the eastern part of Myanmar, where intense fighting between the military and local resistance groups is underway. It is the second Catholic church hit by bombings, after the Catholic Church of the Sacred Heart in the village of Kayanthayar, in the Loikaw area. As confirmed to Agenzia Fides by Father Philip Aung Nge, procurator of the diocese of Loikaw, the mortar rounds hit the church in Demoso which, like all four Catholic churches in the city of Demoso, had also become a place of protection for the internally displaced, defenseless civilians. In addition to the damage to the building, there were no victims because, with the increase in clashes, the parish priest had already decided to move people to a smaller and more isolated chapel. As reported to Fides, the fighting continues in the areas of Demoso (Kayah state) and in the areas of Pekhon, in the nearby Shan state. "We are in a situation of urban warfare that has not been seen in Myanmar since 1948", he points out.
"We cannot say that the churches are a desired target but we see that the military artillery fires indiscriminately on the city without sparing civilian targets such as monasteries, churches, schools, houses", notes the parish priest. The churches are full of displaced people, mostly Christians, as about one third of the population in Kayah state professes faith in Christ. The local Catholic Church, thanks to the tireless work of local priests, religious and laity, provides for the reception but also for nourishment.
"In all the churches in the state we give assistance with food, medicine, but also consolation and spiritual comfort", says Father Philip Aung Nge. The civil resistance fighters in Kayah state have organized themselves into the "Karenni People's Defense Force" (KPDF) which is opposing the militarization of the area, while the military junta has also ordered a strengthening of intelligence measures, controlling the telephone networks, Internet and residents' mobile phones. The military of Tatmadaw (the Burmese army) suffered casualties in the districts of Demoso, Loikaw and Pekhon. As a result of these clashes, in the last five days approximately 70,000 civilians have been displaced from about 150 villages in Demoso, Loikaw and Pekhon: 50,000 in Kayah state and 20,000 in Shan state. Many villagers have fled their homes and have gone to the hills or woods. City residents seek refuge in monasteries, churches and homes for the elderly, schools, but even there they are not safe, given the bombings.
According to Fides sources, the guerrilla seriously risks spreading to the whole nation very soon: the groups of the "People Defense Force", the popular defense forces, active throughout the national territory, are organizing armed resistance in all the major Burmese cities , while in the 30 major urban centers there is a curfew. "The civil war is getting closer and closer. We are really sad about this evolution. But the people, tried by the repression, see no other possible way, while the army hits civilians, women and children: these are criminal acts which we oppose for self defense ", notes the source of Fides. (PA) (Agenzia Fides 5/27/2021)

AFRICA/ETHIOPIA - The Bishops. "It is never too late to stop the violence, the only way forward is peace and reconciliation"