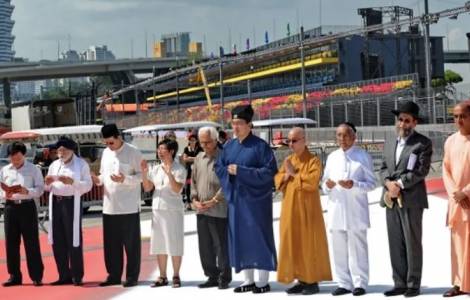 Singapore (Agenzia Fides) - The Catholic Church of Singapore promotes cohesion and collaboration with other religious communities, in order to contribute to peace and social harmony, during the time marked by the Covid-19 pandemic. As Fides learns, in this framework of promoting interreligious dialogue, in recent days the "Jamiyah Singapore, the oldest and most important Malay-Muslim local charitable organization, organized a webinar, in which the Catholic Church took part, offering its vision and contribution. Cardinal Miguel Ángel Ayuso Guixot, President of the Pontifical Council for Interreligious Dialogue, spoke at the online seminar about the role of religious leaders during the pandemic crisis.
The webinar brought together local and international religious leaders and scholars of major religions. The Catholic Church was represented by Cardinal Ayuso and Sister Theresa Seow, religious of the Canossian Daughters of Charity, Vice-President of the Commission for Interreligious Dialogue in the Catholic Archdiocese of Singapore.
Cardinal Ayuso observed that religious leaders emphasized "the religious dimension of the crisis": empty churches, mosques and temples exemplified the "spiritual deprivation" of the pandemic. The solution is represented by "hope, prayer and solidarity". Hope "strengthens the human will" and "transforms life, indicating something beyond the present world", inspiring believers to love and care for "those who suffer the tragedies of the human condition". Prayer is "a powerful tool" that dispels all fear, useful for cultivating "universal brotherhood, in God, for the good of all". Solidarity can be manifested in "collaborative faith initiatives" which include "education in values that will preserve the post-pandemic world from a culture of indifference, selfishness and other social ills".
Sister Theresa, who is also the Secretary of the Interreligious Organization of Singapore, shared that, in this pandemic period, "we are not isolated: even if in solitude, we are in solidarity with each other"
"This is a time to uphold the sacredness of life, a time to slow down, be more contemplative and find time for our community", said the nun. "Covid-19 has increased the awareness of seeing God among us. God lives in the homes and lives of the people around us. In the world the sacred dimension is immersed in the secular one", the nun observed, adding that "religion should be a force for peace and social cohesion and all religions must promote a common effort for harmonious coexistence".
Singapore President Halimah Yacob also spoke and addressed the listeners, members of various religious communities, saying that, during this period of uncertainty, "it is natural for people to draw strength and comfort from the faith". The President commended the efforts of religious communities to build trust, unity and resilience by reaching those who need them, regardless of ethnicity, language or religion.
The population of the city-state Singapore is 5.7 million, of whom about 383,000 are Catholics (9% of the population). (SD-PA) (Agenzia Fides, 29/9/2020)