AMERICA/EL SALVADOR - "The pain caused by a crime cannot be resolved by forgetting": the trial for the assassination of the 6 Jesuits and the 2 women begins 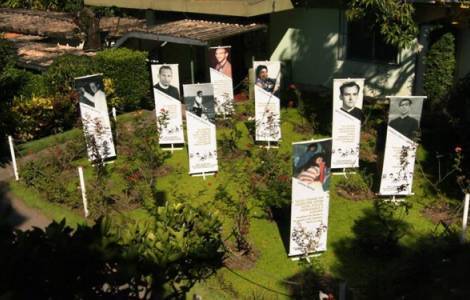 2021-02-08
Cardinal Rosa Chavez: "we are experiencing a society that is environmentally, morally, mentally and perhaps even politically contaminated"

2021-01-18
The Archbishop of San Salvador: after 29 years the peace agreements have yet to be fulfilled and injustice continues

2020-10-17
Water recognized as a public good and human right: the satisfaction of the Church

San Salvador (Agenzia Fides) - Today the public hearing of the trial against several alleged military, intellectual and material perpetrators of the murder of 6 Jesuits, an employee and her daughter, which took place on the campus of the Central American University José Simeón Cañas (UCA), November 16, 1989 begins.
The statement issued by the Central American Province of the Society of Jesus and by the UCA, sent to Agenzia Fides, recalls that the crime was committed 31 years ago "by members of the Salvadoran Army, and from the first moment it was covered by the highest authorities in the country and denied by those who planned and ordered it. Since then, the Society of Jesus in Central America and the UCA have fought for truth to be known and justice done through the Salvadoran judiciary".
On November 16, 1989, 6 Jesuits and two women were shot and killed on the campus of the Central American Catholic University (UCA) of El Salvador: Fathers Ignacio Ellacuría (Rector), Segundo Montes (Superior of the community), Ignacio Martín-Baró (Vice Rector), Amando López (Professor), Juan Ramon Moreno (Professor) and Joaquin Lopez (National Director of "Fe y Alegria"). The two women who were murdered were the cook, Julia Elba, and her daughter Celina Ramos. The six Jesuits, five Spaniards and a Salvadoran, were engaged in the field of training and education, especially of the poorest, in the defense of the weakest, in the claim of human rights, in the reception of refugees (see Fides, 13/11/2010; 20/10/2014; 8/11/2014; 15/11/2017; 14/3/2019).
In their statement yesterday, the Jesuits stress that "in this struggle they have never been alone": "The commitment of the Society of Jesus and the UCA to defend human rights and fight for justice that comes from faith, is what prompted the Jesuits murdered in the UCA to denounce the abuses of power to the Salvadoran people and to seek ways for peace, to end an irrational and unresolved fratricidal war in the military field". It is the same ideals that motivated the Society of Jesus and the UCA "to seek truth and justice from the Salvadoran justice system for more than 30 years".
Retracing some stages of these 31 years, the text hopes that "the public hearing will reveal the truth about this crime that shocked the whole world" and underlines that "the pain caused by a crime cannot be resolved by forgetting, but by recognizing the truth, repentance and dignity of the victims. This is the way of Christian forgiveness and the path to true reconciliation". The Society of Jesus and the UCA authorities are available "to forgive those who planned and carried out this hideous crime", however, "it is necessary to know the whole truth and identify their respective responsibilities, a task that belongs to the judiciary, so that subsequent forgiveness may be offered".
Those who decided to kill the UCA Jesuits, Julia Elba and their daughter Celina, knew that they would not commit "simple murders", concludes the statement, "they killed innocent people, good people, who dedicated their lives to the defense of the poor, the promotion of social justice and the promotion of the common good according to reason and academic knowledge". Therefore "knowing the truth of what happened in this and other cases will be good for El Salvador, will contribute to justice for the victims, it will constitute a transcendental step in the reconciliation process and will also give peace to the victims themselves". (SL) (Agenzia Fides, 8/6/2020)