AMERICA/EL SALVADOR - On January 22, the beatification of four martyrs: witnesses of an outgoing Church, which announces the Kingdom of God with words and deeds 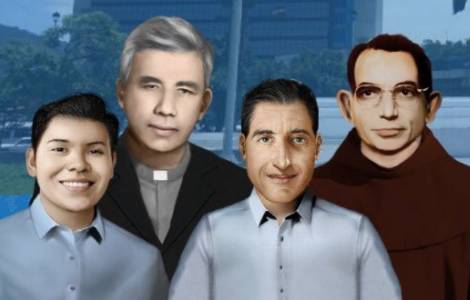 San Salvador (Agenzia Fides) - Next Saturday, January 22, at 5 p.m., Father Rutilio Grande, Jesuit, Manuel Solórzano and Nelson Rutilio Lemus Chávez, lay people, and the Italian Franciscan Fray Cosme Spessotto, OFM, who were murdered on March 12, 1977, and the Franciscan on June 14, 1980 (see Fides, 1/9/2021) will be proclaimed Blessed. The Mass with the rite of Beatification will be held in the Square of the Divine Savior of the World, in front of the Cathedral of San Salvador, presided over by Cardinal Gregorio Rosa Chavez, Auxiliary Bishop of San Salvador, representative of Pope Francis. Twenty-five Bishops and 600 priests are expected to concelebrate, and some 5,000 people representing all parishes will participate, respecting biosecurity and distancing measures. The rite will be broadcast live on TVCa Catholic television, and there will be giant screens in each parish.
Monsignor José Luis Escobar Alas, Archbishop of San Salvador, presented the book "Chronicle of the Beatification and Canonization of Monsignor Romero", a special edition that collects the chronicles of the two events in a single volume, published by the Archbishopric of San Salvador.
The beatification of Monsignor Romero took place on Saturday, May 23, 2015, his canonization on Sunday, October 14, 2018. For each of these two events, the text contains not only an account of what happened, but also the main documents published in this regard. It also commemorates the 35-year journey, from the murder of Monsignor Romero to the day of his beatification, as well as the main events that occurred in the last four years of the canonization process. In view of the beatification on January 22, the Masters in Latin American Theology of the José Simeón Cañas Central American University (UCA) organized the concert entitled "Rutilio lives!": A tribute to the life of the Jesuit and his fellow martyrs, when they fell into an ambush. The concert, which was broadcast by UCA on January 15, through Facebook and the UCA's Youtube channel, saw the participation of the group "Cantando unidos por Monseñor Romero", made up of some members of the groups who, at the time, performed songs inspired by the legacy of Mgr. Oscar Romero and Rutilio Grande. A painting by the artist Edgardo Trejo was also presented. "The work of Rutilio Grande, and in particular his martyrdom with Manuel Solórzano and Nelson Rutilio Lemus, triggered a real explosion of creativity: music, poetry and painting", highlighted Martha Zechmeister, director of the Master in Latin American Theology of the UCA. The Episcopal Conference of El Salvador (CEDES) has published a number of aids to prepare spiritually for the Beatification (see Fides, 12/10/2021): "our martyrs are credible witnesses of an outgoing Church, a compassionate and merciful Church, of a Church that announces the Kingdom of God with words and deeds ", therefore all the baptized are exhorted to be "martyrs" that is to say "witnesses" of Jesus Christ in the different situations of life and builders of the Kingdom of God, as were the blessed martyrs. (SL) (Agenzia Fides, 17/1/2022)