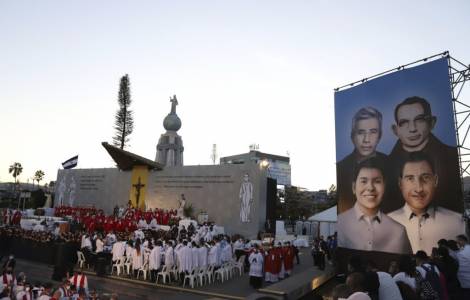 San Salvador (Agenzia Fides) - "Yesterday, the Jesuit priest Rutilio Grande García and two lay companions, and the Franciscan priest Cosme Spessotto, martyrs to the faith, were beatified in San Salvador. They stood by the poor, bearing witness to the Gospel, truth and justice even to the point of shedding their blood. May their heroic example inspire in everyone the desire to be courageous workers of fraternity and peace. A round of applause to the new blessed!", are the words addressed by Pope Francis on Sunday, January 23, after the Angelus, recalling the beatification which took place on the afternoon of Saturday, 22 in the Latin American country (see Fides, 1/9/2021; 17/1/2022; 22/1/2022 ).
The solemn Beatification Mass was presided over, in the name of the Holy Father, by Cardinal Gregorio Rosa Chavez, Auxiliary Bishop of San Salvador. Bishops from various Central American countries, government authorities and diplomatic personnel accredited in El Salvador participated. About 6,000 faithful, in compliance with the security measures established for the pandemic, gathered in the Plaza Divino Salvador del Mundo, in the country's capital, to participate in this historic event.
"In our assembly there are humble peasants who rejoice to see that the Church recognizes the holiness of those who gave their lives in their service. There are also representatives of the communities who were led by Fra Cosme and Father Rutilio" Cardinal Rosa Chavez underlined in his homily. Then he highlighted: "in the figure of Manuel Solórzano and the young Nelson Rutilio, we have the representatives of that immense crowd that no one could count, that is, of the countless anonymous martyrs", recalling the symbolic number of the 75,000 dead "during the fratricidal struggle that we bled for twelve years and that ended happily when the conflicting parties signed the Peace Agreements".
The Cardinal stressed that martyrdom in Latin America is linked to the experience of the Gospel and to the Doctrine of the Church. Father Rutilio Grande "after following the IPLA course in Ecuador and sharing the experience of working with peasants and indigenous people in the diocese of Riobamba, at the time of Monsignor Leonidas Proaño, he returned to our country with a clear and unequivocal option for the poor. It was he who was at the top of the list of our martyrs, followed by twenty American priests, three religious and a missionary and hundreds of anonymous martyrs". Among the most illustrious Pastors are Monsignor Romero and another Bishop, Monsignor Roberto Joaquín Ramos, who was assassinated in June 1993.
"The presence of two lay people, Manuel Solórzano and Nelson Rutilio Lemus, are like a window to look at that reality of an immense crowd that no one could count", added the Cardinal, hoping that our martyrs will help us "to recover the memory and hope not to give up the dream of a reconciled and peaceful country, a country as our God wants: just, fraternal and in solidarity".
In the apostolic Letter with which he authorizes the beatification, Pope Francis affirms that the four martyrs were "heroic witnesses of the Kingdom of God, the Kingdom of Justice, love and peace to the point of shedding blood. From now on they will be called blessed and will be celebrated every year in the places according to the rules established by law, respectively on March 12 and June 10". (SL) (Agenzia Fides, 24/1/2022)

AMERICA/BOLIVIA - Franciscan religious killed in church after the Easter vigil

VATICAN - Pope Francis: in the Christian mission there are no "protagonists" and "executors"