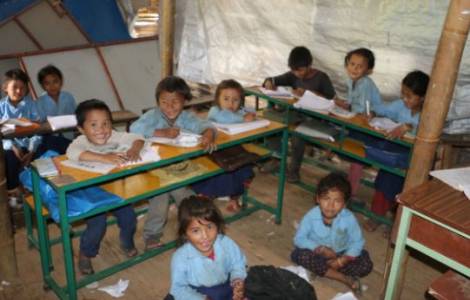 2023-01-20
Father Miller, missionary with a "passion for evangelization"

Kathmandu (Agenzia fides) - "There was a time when you could not freely practice and profess your faith. Until the arrival of the Jesuits, in the late 1990s, there were no priests for the Eucharist and other sacraments. It was necessary to travel across borders, in India, for thousands of kilometers, to participate in the Eucharist. Yet you persevered in your faith. I admire and appreciate your faith in Jesus Christ". This is what Fr. Arturo Sosa SJ, Superior General of the Society of Jesus, said during his journey to eastern Nepal, in Maheshpur, in the Jhapa district, where Fr. Sosa went in recent days, as part of his visit to South Asia.
"At the end of the 90s - Fr. Sosa recalled - the Society of Jesus established itself in Jhapa with the aim of educating Catholic children and providing pastoral and spiritual assistance to the faithful. In 20 years, the mission has extended to the point of including four schools, a parish, a chapel and six social centers. Every Easter there are new families who choose to be baptized. There are great prospects for evangelization. The fact that many families are attracted to the Christian faith is a sign that you are living well and you are setting a good example of Christian life. I would like to thank the catechists for their evangelical spirit. Your parish is one of the promising seeds of vocations to religious life. Pray for vocations to religious life. I encourage the young boys and girls present here to think of a religious vocation".
The Provost said he is aware that "people's living conditions are very difficult. Education is one of the means of empowerment. It broadens our perspectives and broadens our horizons. It is important to remember that education is a turning point. It can help improve job opportunities and ultimately the standard of living. Therefore, I encourage parents to educate their children. We need to motivate young people to study well. However, to educate and train only intelligence is not enough; we must also educate our hearts. Jesuit education aims at all-round development. Today the world is changing rapidly. There are many good things, but at the same time there are problems that create divisions based on religion and culture. The Christian vocation and also the mission of the Jesuits is to promote reconciliation, justice and peace, thus contributing to the construction of more human societies".
Fr. Sosa, praising the presence and journey of the small Catholic community in Nepal, concluded: "It is important to remember that whatever work we do is the work of God and we are simple collaborators in his work. The work of God does not belong to any religious congregation or to any individual. Therefore, we must work with all people of goodwill who are committed and willing to build a more human and just world". The Provost confirmed the commitment of the Society of Jesus in Nepal to spread the Gospel and to establish better living conditions for the population.
On October 7, 1983 the territory of Nepal, until then under the jurisdiction of the Indian diocese of Pattna, was erected in "Missio sui iuris", based in the capital Kathmandu, entrusted to the Jesuits. At the end of the eighties several religious congregations, male and female, opened houses in different places in the country. On November 8, 1996 the mission in Nepal was elevated to the Apostolic Prefecture, and on February 10, 2007 to Apostolic Vicariate, with the first Apostolic Vicar Fr. Anthony Francis Sharma, SJ, a native of Kathmandu, who had been responsible for it since the creation of the Missio sui iuris. Nepal has 29 million inhabitants, 80% of whom are Hindus. Christians are about 1.4% and of these 8,000 are Catholics. (PA) (Agenzia Fides, 6/3/2020)