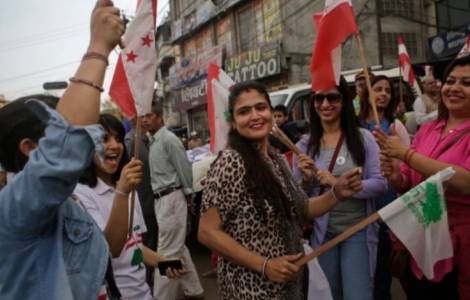 2023-01-20
Father Miller, missionary with a "passion for evangelization"

Kathmandu (Agenzia Fides) - Nepal is set for general elections on November 20, 2022 in which the 275 members of the House of Representatives will be chosen. This election cycle in Nepal is characterized by independent candidates who have also won local elections in major cities such as Kathmandu, Dharan and Dhangadhi. Furthermore, a new generation of youth leaders is shaking up old political patterns in all parties, especially those that have traditionally maintained political hegemony.
Prime Minister Sher Bahadur Deuba, who has been in government since July 2021, will be the candidate of an alliance of socialist groups and the Nepalese Congress Party. The main opposition party is the Communist Party of Nepal, led by former Prime Minister K.P. Sharma Oli. Among the new aspiring leaders are: Rahul Kumar Mishra, former president of the Nepal-Tarai student union; Yug Pathak, writer, journalist and political commentator; and Sagar Dhakal, an independent candidate who is very active on social media.
The nation has seen ten governments since 2008, when the monarchy was abolished. The Prime Minister is elected indirectly, through elections of the federal Parliament, in which a governing majority will be formed. In this electoral round they simultaneously elect seven assemblies of the federated states, established by the first constitution adopted in 2015, the first after the fall of the monarchy.
According to Fides local sources, the political transition will not greatly affect the situation and status of the local Catholic community, which generally maintains good relations with civil and political institutions and carries out its pastoral and social mission.
As regards the Catholic faith, after the first proclamation of the Gospel in Tibet which took place with the Capuchin missionaries in the early 1700s, and the subsequent interruption of that experience, Nepal remained without Christians for 140 years. The Catholic faith resurfaced in the Kingdom in the 1950s, when the Jesuits present in Patna, India, moved to Kathmandu at the invitation of the king, in what was the only Hindu nation in the world, which started the first experiment school for Nepalese students. Jesuits, Indians and Americans were able to enter Nepal to teach, but without exercising pastoral ministry.
On October 7, 1983 the territory of Nepal, until then under the jurisdiction of the Indian diocese of Patna, was erected as a "Missio sui iuris", with headquarters in the capital Kathmandu, entrusted to the Jesuits. In the late 1980s various religious congregations, male and female, began to open houses in various parts of the country. On November 8, 1996, the mission in Nepal was elevated to Apostolic Prefecture. In the late 1990s, the Society of Jesus took up residence in Jhapa with the aim of educating Catholic children and providing pastoral and spiritual assistance to the faithful. In 20 years, the mission has expanded and includes four schools, a parish, a chapel and six community centers. On February 10, 2007, the Prefecture became an Apostolic Vicariate, and the first Apostolic Vicar was Fr. Anthony Francis Sharma, SJ, a native of Kathmandu, who had been responsible for it since the creation of the "Missio sui iuris".
Nepal changed its institutional architecture in 2008, becoming a secular and democratic nation after abolishing the Hindu monarchy. Religious freedom was already enshrined in the 1991 Constitution and is present in the new 2015 Constitution; however in 2017 Parliament promulgated an "anti-conversion law", which limits freedom of expression, conscience and religion.
Today, 113 priests, including diocesan and religious, over 200 nuns and lay people carry out pastoral service in 14 parishes, mainly through 79 educational institutes (including a college, 18 high schools and two technical institutes), providing education to more than 30,000 students. Caritas Nepal, established in 1989, carries out social welfare programs for the elderly, poor, sick and displaced persons.
Nepal has 29 million inhabitants, 80% Hindus. Christians are about 1.4% and of these 8,000 are Catholics. (PA) (Agenzia Fides, 18/11/2022)