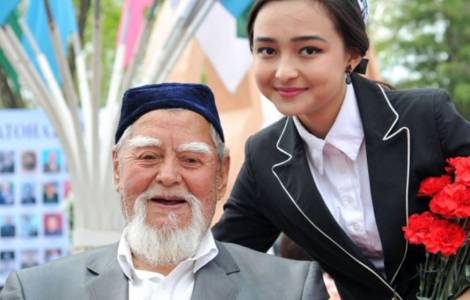 Tashkent (Agenzia Fides) - "Last Sunday, in our church in Samarkand we celebrated Igor, one of our older parishioners, because, after spending all his life in Uzbekistan, he decided to return to his homeland, Poland. After mass we prayed for him and organized a small moment of fraternity to say goodbye to him. For us, Igor is a very important person because his grandfather was one of the initiators of the parish of Samarkand, founded 100 years ago, just like that of Tashkent". This is what Apostolic Administrator of Uzbekistan, Franciscan Fr. Jerzy Maculewicz reports to Agenzia Fides.
The episode is the code of the pastoral style and the presence of the few Uzbek priests and religious, towards the population: a style imbued with "proximity" and closeness that starts from weaving an authentic and profound human relationship. "In recent months we have been trying to make our Uzbek parish communities feel our closeness. For example, on the occasion of the World Day of the Sick, I went to Urgench, where we celebrated the sacrament of the anointing of the sick, received by about fifteen people. I then went to the home of three sick faithful who cannot attend the parish, we prayed together and I brought the Eucharist to them", explains the Franciscan.
The "Day of the Sick" was also celebrated in the city of Tashkent. "Since 11 February fell on Tuesday and not all the faithful could take part in the mass, we anticipated the celebrations to the previous weekend, experiencing a Eucharistic adoration and the community celebration of the Sacrament of reconciliation. Subsequently, we celebrated mass with the anointing of the sick, followed by a recreational moment with everyone present", he concluded. They are small signs and simple moments of community life which - explains the Apostolic Administrator - serve to cement the small Catholic community and give a visible sign of the evangelical life according to the commandment "They will recognize you from how you will love each other".
In this Central Asian nation, faith, repressed during the Soviet period, was gradually reborn after the dissolution of the former USSR and experienced a turning point in 2005: among the apostolic Constitutions prepared by John Paul II, the last, in chronological order , is dated 1st April 2005 and has the name of "Usbekistaniae". With that document - issued just the day before his death - the Pope wanted to raise the Uzbek "Missio sui iuris" to Apostolic Administration, which had been created eight years earlier. Under the protection of Saint John Paul II - chosen, not surprisingly, as patron - the Catholic Church in Uzbekistan continues to live and witness the Gospel in a territory varied from an economic, social and religious point of view. The Catholic presence in Uzbekistan is made up of about 3,000 baptized, distributed in five parishes. (LF-PA) (Agenzia Fides, 28/2/2020)