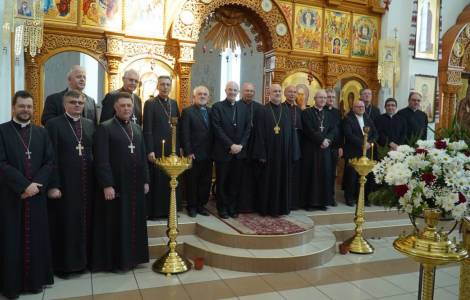 2022-10-10
Ignatian spiritual exercises in Samarkand, to guard the "bud" of faith

Tashkent (Agenzia Fides) - The first meeting of the newly formed Bishops' Conference of Central Asia, held from April 26 to 30 in Nursultan, Kazakhstan, was an opportunity to plan the future, but also to experience a moment of fraternity. Jerzy Maculewicz, OFM Conv., Apostolic Administrator of Uzbekistan and newly elected vice-president of the organization says: "We devoted the first two days to formal activities, in particular to the election of the various offices: José Luis Mumbiela Sierra, Bishop of the Holy Trinity in Almaty, has been appointed President of the Conference, I will be his deputy, while Evgeny Zinkovsky, Auxiliary Bishop of the Diocese of Karaganda, will assume the role of General Secretary. The program, however, also gave us the opportunity to get to know each other better and experience moments of fraternity and prayer".
In particular, says Fr. Maculewicz, two days were dedicated to visiting the National Shrine of Oziornoje, dedicated to Mary Queen of Peace: "It is a miraculous place: in 1941, during a particularly cold winter, the community of Poles deported to that area prayed devotedly to Mary to save themselves. On March 25 of the same year the snow melted, forming a lake full of fish, thanks to which the faithful were able to survive starvation. In this special place, during the mass on Sunday, April 24, we entrusted our work and our Countries".
The Episcopal Conference was originally designed to bring together the Churches of the "Stans" - the former Soviet republics of Central Asia, Kazakhstan, Kyrgyzstan, Tajikistan, Turkmenistan and Uzbekistan - but participation in the first meeting was extended to church representatives from Mongolia, Afghanistan and Azerbaijan. Maculewicz said: "We priests from Central Asia were happy to welcome Bishop Vladimir Fekete, Apostolic Prefect of Azerbaijan, Bishop Giorgio Marengo, Apostolic Prefect of Ulan Bator in Mongolia, and Father Giovanni Scalese, responsible for the Missio sui iuris of Afghanistan. The former has asked to participate as a guest for the next two years. Fr. Marengo and Fr. Scalese, on the other hand, have formally requested the Holy See to join the Conference , because of the cultural proximity between their countries and those of Central Asia. Our Conference has welcomed their requests, but we are now awaiting the response of the Holy See in order to be able to update the statutes with the new members". The new body, created last fall following a decree by the Congregation for the Evangelization of Peoples, will meet again in mid-September, on the occasion of the visit of Pope Francis to Kazakhstan. (LF/PA) (Agenzia Fides, 7/5/2022)