ASIA/UZBEKISTAN - Ignatian spiritual exercises in Samarkand, to guard the "bud" of faith 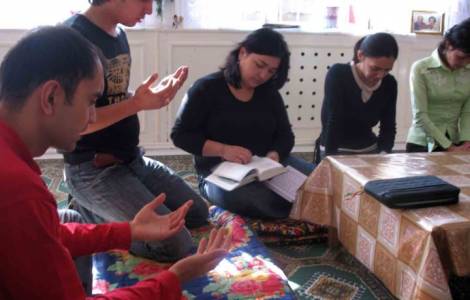 2022-10-10
Ignatian spiritual exercises in Samarkand, to guard the "bud" of faith

Samarkand (Agenzia Fides) – To spend a few days in silence, according to the charism of St. Ignatius of Loyola, and propose the practice of the Ignatian Spiritual Exercises as an opportunity to be closer to God and discern what the Lord's good plan for one's life is: this is what many baptized people in Uzbekistan lived in recent months, thanks to the proposal of the priests of the Institute of the Incarnate Word of Samarkand. From May to September - informs to Fides Agency Fr. Ariel Álvarez Toncovich, parish priest of the Church of Saint John the Baptist in Samarkand - the religious organized five cycles of Spiritual Exercises, which involved small groups of Catholics, from different ages and state of life, from different Uzbek cities. The initiative, reports Father Ariel, was greatly appreciated by all the faithful, young and old.
"It all started from the experience of 18 women from the parish of Tashkent, who came on a visit to Samarkand, to whom we proposed this form of prayer and inner journey unknown to them. Deeply moved by the experience, they discussed it with the Apostolic Administrator of Uzbekistan, Fr. Jerzy Maculewicz, who asked us to organize other similar events and to involve the faithful present in other cities. We received several adhesions and divided the participants into several groups, of different ages: in particular, the first two groups involved men and women between 50 and 60 years of age, while the other groups were made up of young people between 20 to 30 years of age", says the priest.
The Spiritual Exercises formulated by the Holy Founder of the Society of Jesus are an integral part of the charism of the Institute of the Incarnate Word, and include five days of silence and meditation according to the spiritual passages marked by St. Ignatius: "This type of experience always represents an important step in the journey of faith of those who participate, especially in these mission lands", says Father Toncovich. According to the priest, in fact, "in countries with a Muslim majority, people need to discover what the Catholic Church really is, how to live the Christian faith in the depths of one's heart, how to pray with all one's being". The religious of the Institute of the Incarnate Word present in Samarkand have chosen to respond to this need with this type of preaching: "We missionaries, our poor forces, are entrusted with the 'plantatio Ecclesiae' and with the task of caring for and cultivating the little seed of faith. We see that praying according to the method of Saint Ignatius of Loyola is an important instrument and generator of new life. Sometimes evangelization methods presented as "innovative" are sought in the Church, but we can testify that the Spiritual Exercises of Saint Ignatius, born more than five centuries ago, are still very useful and relevant. We will continue to propose them to the community as a stage in the journey of faith for the baptized", concludes Father Ariel.
Currently, the small Uzbek Catholic community, made up of about 3,000 baptized, has 5 parishes throughout the country: the approximately 700 faithful in Tashkent are joined by others in Samarkand, Bukhara, Urgench and Fergana. The Uzbek population of 30 million inhabitants is 90% Muslim. About 3.5% are Russian Orthodox Christians, while another 3% comprise small Christian communities of other denominations, including Catholics. (LF) Agenzia Fides, 10/10/2022)