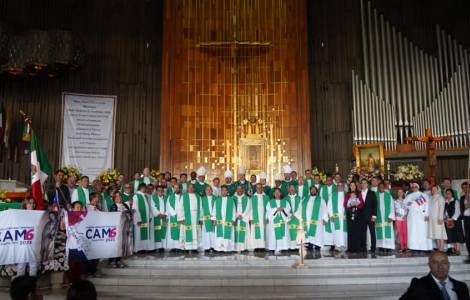 Mexico City (Agenzia Fides) - With the solemn Mass presided yesterday in the Shrine of Santa Maria di Guadalupe, so important for the evangelization of the entire American continent, Archbishop Giampietro Dal Toso, President of the Pontifical Mission Societies (PMS), officially began the journey of preparation for the sixth American Mission Congress, CAM 6, which will be celebrated in Puerto Rico in 2023. A path that will engage all the dioceses of the continent, as he pointed out in the homily, "so that the missionary Congress is truly an ecclesial event, that is shared by all the Churches, by all Catholics on the continent", hoping that "missionary zeal can renew all the Churches, united in universal communion".
The celebration that marked the start of the journey towards CAM 6 was attended by bishops, numerous priests, men and women religious, and lay people, as well as the PMS national directors of the continent, who in these days will take part in their continental assembly (see Fides, 15/2/2020) and a large delegation from the Church of Puerto Rico, which will host CAM 6.
In his homily, the President of the PMS focused on the theme of wisdom, drawing inspiration from the Liturgy of the Word of the day. "We need a wisdom that illuminates, inspires, accompanies, perfections the missionary impulse, the true objective of CAM" he said recalling the book of Sirach. According to the words of Saint Paul, the wisdom preached by Christ "is not of this world", indeed it is in contrast with the wisdom of this world:" this is clearly manifested in Christ crucified and risen 'scandal for the Jews, folly for the Gentiles', as Paul writes a few verses before. This first proclamation of the Church, the heart of her message, is divine wisdom, because it is humanly inexplicable that life is born from death. As missionaries, even today we are called to present the mystery of Christ dead and risen, divine wisdom".
The Gospel of the day recounts the Sermon on the Mount, "apparently full of paradoxes, because it draws on a wisdom that is not human, but divine" continued the Archbishop, admonishing that "if our measure of things, people, facts of life and history is based exclusively on human justice, it means that we have not yet made divine wisdom our own".
"To be missionaries we must first of all immerse ourselves in this wisdom and make it our own, without fear of losing our 'too human' wisdom, otherwise everything remains in the dark", urged the President of the Pontifical Mission Societies, who then stressed: "Preparing CAM means being illuminated by a wisdom that comes from above and is not ours; let us allow ourselves to be questioned without fear and without prejudice by this divine wisdom, without which all the ecological, human, social, ecclesial reality remains in the dark".
In the final part of the homily, Archbishop Dal Toso reiterated that "Christ, the eternal wisdom of the Father, sends us all, ad gentes, to the ends of the earth"; "The Church is the bearer of this wisdom and a missionary Church, as Pope Francis wishes, cannot fail to respond to this universal call"; "No one can be excluded from the knowledge and communion of life with God the Father, with his Son Jesus Christ, with the Holy Spirit".
The American continent received the Gospel "to make it its own, to internalize it and to give it" and "the missionary disciple is a disciple because he receives faith and is a missionary because he offers it", concluded the Archbishop, exhorting: "Let's open up to the whole world so that the whole world will find the key to the interpretation of life, of history, of the whole being, in the wisdom of Christ, in which everything has been created". (SL) (Agenzia Fides, 17/2/2020)

AMERICA/MEXICO - New tools of discernment for animation, formation and missionary cooperation on the continent