ASIA/KAZAKHSTAN - The poor are "the daily bread" 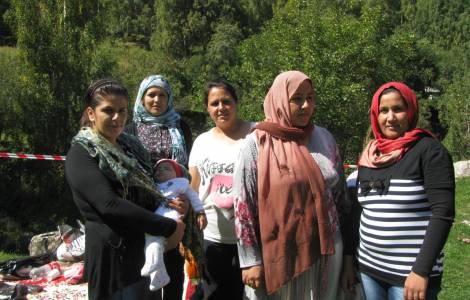 Almaty (Agenzia Fides) - "The contact with the poor here is daily bread. The poor are always with us. We read the Holy Father’s message for the World Day of the Poor, which will also be studied and deepened by the various Caritas groups, in all of our churches": says to Fides, friar Luca Baino OFM, a minor friar in the Kazakh city of Almaty.
In Kazakhstan, the Catholic Church is organized in four apostolic regions. Catholics have created 21 small basic health care centers run thanks to the collaboration of the entire Christian community and accessible to anyone without distinction of ethnicity or religion. Friar Baino explains: "Often in our parishes, especially in villages far away from big cities, parishioners are part of those categories Pope Francis speaks of in his message for the Day of the Poor". But the state of necessity, according to the friar, often represents the first step towards the Church: "If anyone, of any religion belief or non-believer, is in need, the door of the Catholic Church is always open. We are also ready for immediate help, for small issues or daily needs, without asking the poor which religious community they belong to. Here is where a path of knowledge begins that opens to the work of God's grace and can turn into conversion".
In its evangelical mission, the Catholic community in Kazakhstan promotes human dignity and human rights, the social and economic development of the most disadvantaged in a country that, from the natural resources point of view, is the one with the greatest amount of per capita wealth in the world. But wealth is not equally redistributed, analysts note, due to widespread corruption and extreme regional fragmentation.
In Kazakh’s subsoil there is 60% of the former Soviet Union's mineral resources: iron, coal, methane, metals for electronics, nuclear and missile engineering. Since the country declared independence from the Soviet Union in 1991, wealth from minerals has quadrupled the per capita income, while unemployment has fallen to 5%. And while in the Soviet era about half of the population lived at a livelihood level, today the rate of poverty is lower
than 5%. In the major cities such as Almaty, Astana and Shymkent, it is impossible to ignore the rapid increase in wealth. Over the course of about 25 years, the country has moved from a situation where half of its population was very poor to one where about half belongs to the middle class.
The most important challenge today is to reduce the strong disparities between regions, not only in terms of income, but also in terms of access to public services, justice, health, protection and respect for human rights. Rapid economic growth, in fact, has led to greater vulnerability of the poorer sectors of society, especially because of the rise in prices of primary needs and services such as drinking water and social services. Among the social groups most at risk of chronic poverty are the unemployed and self-employed, especially women. (LF-PA) (Agenzia Fides, 21/11/2017)

AMERICA/CHILE - "For a fair and worthy Chile": meeting on the challenges of evangelization in the current situation

EUROPE/ITALY - The Orionine in the year of Youth: "Live every encounter in the sign of charity"