ASIA/INDIA - The precious contribution of Catholic universities to the nation 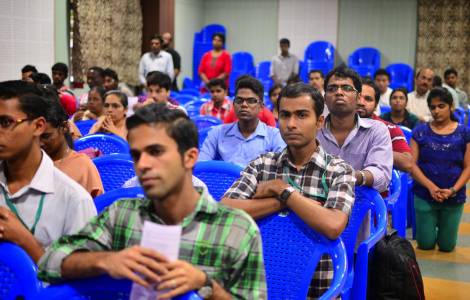 Calcutta (Agenzia Fides) - Catholic universities in India offer a valid and precious contribution to building the country, guaranteeing quality education to young people of all religions, cultures and ethnicities. This is what emerged from the national colloquium on the 'Future of Christian Higher Education and Contemporary Transitions in India', held in recent days in Calcutta.
Five Catholic universities of India took part in the colloquium: Assam Don Bosco University (Guwahati), Christ University (Bangalore), St Xavier University (Bhubaneswar), St Xavier University (Calcutta), and St Joseph University (Kohima). "The topic is pertinent in the contemporary educational scenario in India and subtle attempts are being made to saffronise (from the color saffron of Hindu extremist groups, ndr) educational establishments of the country", explains to Fides Salesian Fr. George Thadathil, who was present.
Speaking of the mission of Christian education in India, former Principal of Delhi’s St Stephen’s College Dr. Valson Thampu, stated that "Christian educational institutes exist to make the difference in society". Two universities, Don Bosco and Christ University, have existed for more than nine years. Three more were opened last year and this year. Students in all five Catholic universities are 16,000 in all. Out of 42,000 colleges in India, 500 are Catholics, about 1%. There are 789 universities in the country, both public and private.
The meeting of Catholic universities was an opportunity to share experiences on higher education in the context of the current phase of cultural and social transitions. "The Catholic Church in India is universally recognized for its educational institutions and technical training, for its criteria of quality and excellence, contributing to the nation's construction", says to Agenzia Fides Salesian C.M. Paul, professor at Assam Don Bosco University and organizer of the event. "I graduated at Assam Don Bosco University in Guwahati, founded in 2008 as the first Catholic university in India. We organized the meeting of Catholic universities to improve our educational service, according to the common values to the Indian nation, to give our contribution to the common good", he concludes
In India, the university system was born about a century and a half ago with the establishment of universities in Calcutta, Madras, Bombay, Allahabad and Lahore between 1857 and 1902, according to the British model. In the course of major political, economic and social changes in the country, there have been several changes in the education system, including the university system, particularly after independence in 1947. Many renowned Catholic universities and colleges lost their core positions and only a few managed to maintain their status.
The number of students enrolled in the Indian higher education system rose from 7.42 million in 1999-2000 to about 9.7 million today, indicating annual growth of almost 10%. Over the last decade, there has been a significant increase in the number of private colleges and universities. The percentage of students wishing to enter education institutions will likely increase significantly, and higher education continues to expand. Catholic universities are a guarantee of quality. (SD-AP) (Agenzia Fides, 21/11/2017)