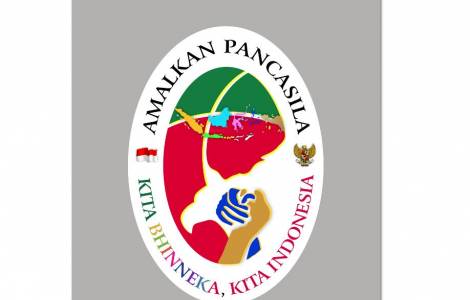 Jakarta (Agenzia Fides) - 2018 will be for the faithful of the Archdiocese of Jakarta the "Year of Unity": as Fides learns, this was decided and announced by Archbishop Ignatius Suharyo, highlighting the three-year pastoral plan until 2020. "The Church of Jakarta - writes the Archbishop in a message to all Catholic communities - wishes to be the bearer of the joy of the Gospel, for the construction of the Kingdom of God, fulfilling the principles of the Pancasila (the Charter at the basis of national coexistence, ndr), by respecting human dignity and safeguarding Creation". The pastoral action of the Church "is driven by the impulse of the Holy Spirit and is based on the spirituality of the Incarnation of Jesus Christ", notes the message, and with this spirit, intends to work "to make the faithful stronger in faith, committing themselves at a social level with an attitude of inclusive compassion, taking care of the environment".
The Archdiocese published a logo for the Year of Unity, and a slogan that illustrates it: "Let us put into practice the Pancasilla: in diversity, we are Indonesia", with explicit reference to the contribution offered by Catholics to the nation. The emphasis is placed on the unity of the Indonesian nation and on the bond that holds people of different culture, religion and language. In the symbol, there are two shapes that cross each other: the figure of the Virgin Mary embraces Garuda, a symbol of Indonesia. The broken egg from which the flying animal comes out represents "the resurrection of a united Indonesian nation and ready to defeat divisions", while the Virgin recalls "the prayer of the Church for the unity of the Republic of Indonesia". On the top there is a cross symbolizing "the presence of God who gives graces and blessings to our people". In the logo the colours of the Indonesian flag, red and white, are used to represent "the vastness of the homeland, its cultural richness". In the drawing, one can also see two different colored hands intertwining, precisely to express the national motto "unity in diversity" and the will to "cooperate to build this country with love and faith in one God", with "the spirit and the courage to unite in the defense of the Pancasila and the Constitution".
The initiative of the Diocese of Jakarta fully meets the guidelines just issued by the Episcopal Conference which, in its recent plenary assembly, stressed that Christians in Indonesia are called to be "a creative minority, capable of promoting the Pancasila and to fully live as good Catholics and good citizens", while in the country radical Islamic groups occupy more and more space in society. (PP-PA) (Agenzia Fides, 14/11/2017)

ASIA/VIETNAM - Dialogue, cooperation and positive developments in relations between the Holy See and Vietnam