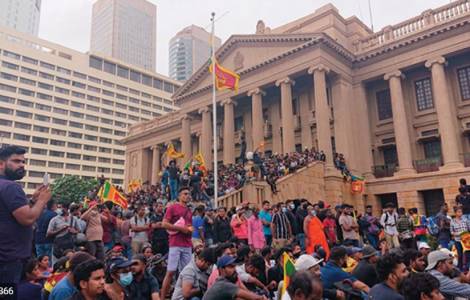 2023-01-30
Resignation and appointment of bishop of Badulla

Colombo (Agenzia Fides) - The serious political, economic and social crisis that Sri Lanka is going through is linked to an equally serious crisis of the rule of law: this is the thought expressed by the Archbishop of Colombo, Cardinal Malcolm Ranjith, who reiterated the profound concern and consternation of the entire Catholic community for the situation in which the nation finds itself. According to information from Agenzia Fides, during the celebration of the 150th Jubilee Mass in the Church of the Holy Apostles of Modara, held on July 31, the Cardinal asked the assembly to always watch over and protect the Rule of Law in the country. "The nation," he said, "has fallen into an abyss because of people greedy for power and wealth who have betrayed the policies agreed upon by all." In such a delicate situation, believers, in what he called a "Dharmadweepa" ("land of religion"), are called to take an interest in and take charge of the social and political conditions of the country, promoting and fighting for justice, legality, the rule of law and the dignity of every man and woman.
"You have to be ashamed before the world. There is no law in the country. There is no place for justice. There is only illegality and the law of the powerful", he remarked, also referring to the 2919 Easter massacres, when terrorist attacks hit churches and hotels. "We called for an independent investigation, but nothing has been done in our country to prosecute those who have been identified as guilty" the Cardinal noted.
Recalling the 269 people who died in Katuwapitiya, Kochikade and many other places in Easter 2019, the Cardinal said with pain that "justice has not been done for them so far, which illustrates the power of some" who have not been prosecuted for the evil they have done. In this critical passage for the destiny of Sri Lanka, the Cardinal appealed to the personal responsibility of each baptized person and each citizen, which is the path to hope for a better future: "Let us live a life according to the evangelical principles and values of peace, justice, transparency, honesty, work, each one in its small measure", he exhorted, "for the common good of society and the country". (SD/PA) (Agenzia Fides, 2/8/2022)