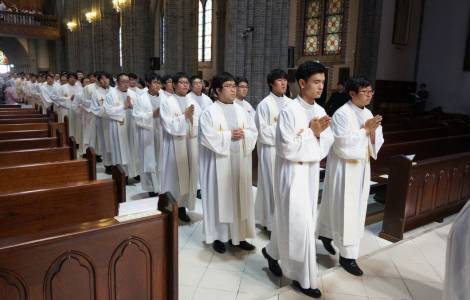 Seoul (Agenzia Fides) - The first is St. Andrew Kim Dae-geon, ordained a priest on August 17, 1845, the most recent is Don Kwang-Kyu Gi, who became a priest on September 24, 2016. Since 1845 (considered the "Official" date of birth of the Korean Church) to date, 6,021 Koreans ordained priests are in their country of origin or in other nations of the world. These are some of the data contained in the new yearbook of the Korean Church 2017, sent to Agenzia Fides, which collects data, figures and historical information on the Catholic community in Korea.
In the overall calculation of priests, there are 122 new Korean names in the country or incardinated in the dioceses or religious orders, between 2015 to 2016, according to data that distinguish the priests of Korean nationality from missionaries and foreign priests. The text, prepared by the Korean Bishops' Conference, is published on the basis of data received from all the dioceses and researches carried out. It is also available in e-book format.
To 31 December 2015 the baptized Koreans were 5.6 million, divided into 19 dioceses, and accounted for 10.7% of the total Korean population, attending 1,706 existing parishes, next to the 761 mission stations.
According to historical reconstructions, the "unofficial" foundation date of the Korean Church is 1784, when a group of young noblemen founded a "community of the Church" in the country, no sacraments and no priests. They then asked the Bishop of Beijing, and later in Rome, to send them instituted ministers. (PA) (Agenzia Fides 26/01/2017)