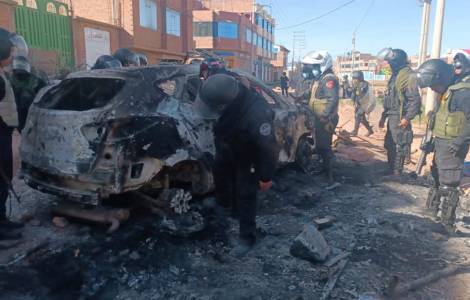 2023-01-26
Resumption of peace talks in a climate of hope, also with the support of OHCHR

2023-01-10
"Let's not allow Peru to be destroyed by our actions or fall into an institutional abyss"; still dead and wounded in the clashes

2022-12-23
We ask for peace, tranquility, unity and reconciliation, based on a broad process of listening and national dialogue

Lima (Agenzia Fides) - Yesterday, the number of victims of the anti-government demonstrations that have been bloodying Peru since December 7, when President Pedro Castillo was deposed and then arrested for attempted coup d'état, rose to 62. In accordance with the Constitution, the vice-president Dina Boluarte was appointed to this post. Protesters, through strikes and blockades of roads, railroads and airports, are demanding Boluarte's resignation and the dissolution of Congress.
According to police sources, a police officer was kidnapped and is being held hostage after yesterday's clashes in La Joya. The number of injured throughout the country has now exceeded 1,200, while the material damage to structures and property is considerable. The protests and subsequent clashes with police forces have spread to almost the entire country, including the capital, Lima. The Peruvian government declared a state of emergency for 30 days, starting January 15, in several regions, and extended the curfew in the department of Puno, the epicenter of the unrest. However, President Boluarte has ruled out her resignation (see Fides, 10/1/2023).
"I invite you to pray for an end to the acts of violence in Peru," Pope Francis said yesterday during the Angelus. "Violence extinguishes hope for a just solution to the problems. I encourage all parties involved to take the path of dialogue between brothers of the same nation, with full respect for human rights and the rule of law. I join the Peruvian bishops in saying: ¡No a la violencia, venga de donde venga! ¡No más muertes!". The same invitation was also expressed by the Pope during the Angelus on Sunday, December 18, 2022: "Let us also pray for peace in Peru, so that the violence in the country will cease and the path of dialogue will be taken to overcome the political and social crisis that is affecting the population."
The local Church, through the Peruvian bishops, as well as the representatives of the different religions and faith communities present in Peru (see Fides, 23/12/2022), do not tire of calling for dialogue and an end to violence. The latter was published at the end of the 124th Plenary Assembly of the Bishops' Conference and calls on the authorities and all political actors to find a consensual solution to this serious crisis and to the "harsh political and social confrontation" that is currently taking place. The bishops offer their service once again "to mediate and build bridges of encounter", because "the Church must be truly in solidarity with all humanity and its history".
The message, entitled "Let us be builders of peace and justice", expresses sorrow for the violence that has been unleashed, "because violence only generates more violence," for the death of so many Peruvian brothers and sisters that "is a deep wound in the heart of our people", as well as for the suffering of all the wounded, both civilians and police. "This obliges us to resolutely change course: we want peace!" the bishops write, stressing that these atrocities "cannot go unpunished" and that those responsible must be sought out and punished.
The Bishops' Conference invites to "stop encouraging polarization" and to "stop hurting each other", because "this situation requires dialogue, listening and decision". "It is time for the authorities and all the political actors to commit themselves in a responsible manner, in order to find a consensual solution to this serious crisis", they urge. "It is time to raise our heads and move forward towards meeting and reconciling with justice. The country must not continue in anxiety, fear and uncertainty. Let us take on the commitment to rebuild Peru and let us also ask civil society to assume its responsibilities". (SL) (Agenzia Fides, 23/1/2023)