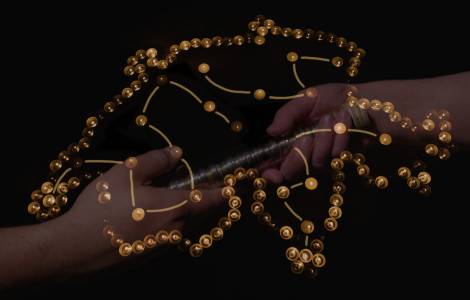 2022-10-01
In search of witnesses of Christ, in the footsteps of Pauline Jaricot

Friborg (Agenzia Fides) - In the official video of the initiative: Search for the "Paulines", conceived and promoted by Missio Switzerland, the national direction of the Pontifical Mission Societies in Switzerland, Jessica is mentioned, who in the past dedicated herself to help migrants, people suffering from Alzheimer's or autism. And that after the discovery of faith in adulthood, she is now dedicated to raising funds for an organization that deals with humanitarian emergencies. There is also talk of Father Marco who travels through the territory of his parish on his “Apecar” motorcycle to distribute aid to families in need. There is Rita who, after discovering the beauty of the mission in Ecuador in a children's home, has not stopped doing so since then... From Peru to Kenya to "walk" alongside the communities she crossed on her way: for Rita, this is what faith is, also now that she has returned home to Switzerland.
These three testimonies represent the three linguistic regions of Switzerland and exemplify the meaning of this activity that today, October 1, at the beginning of the Month of the Missions, has been launched and will continue until May 3, 2023.
Aimed at parishes throughout Switzerland and inspired by the World Mission Day theme
"You will be my witnesses" (Acts 1,8), the "Search for the Paulines" ideally wants to kick off a "relay race" throughout Switzerland, which consists of videos with brief testimonies of men and women of today inspired by the figure of Pauline Jaricot, foundress of the Pontifical Society for the Propagation of the Faith, beatified last May (see Fides, 23/5/2022).
"We want to give a voice to the witnesses who, like Blessed Pauline Jaricot, are anchored in their faith, and whose commitment has the world as its horizon. This initiative offers the opportunity to discover the "richness" found in our parishes and in the places where we live", explains Sylvie Roman, head of the "Universal Church" sector of Missio and co-creator of the project.
"Each parish that participates is invited to produce one or two videos of a «Pauline» in which the witness recounts her commitment to others, sharing what she does, what motivates her and how this commitment has an impact "to the extreme ends of the earth", as stated in a note sent to Fides. The parish sends the videos to Missio and passes the baton to another parish, thus forming a chain". (E.G.) (Agenzia Fides, 1/10/2022)