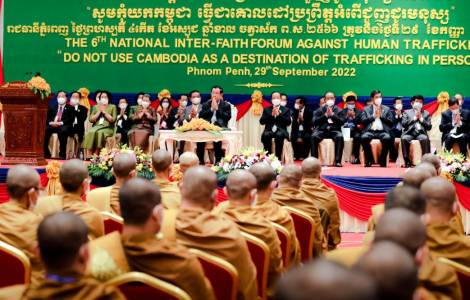 Phnom Penh (Agenzia Fides) - A fruitful and full collaboration between the Catholic Church, other religious communities, associations and the government is important in order to combat the phenomenon of human trafficking in the country: this is what several Catholics, priests, nuns and lay people who participated, alongside Buddhist monks and exponents of other religions, in a national conference organized by the government yesterday, September 29, in Phnom Penh declare, which was also attended by Jesuit Bishop Enrique Figaredo Alvargonzález, Apostolic Prefect of Battambang.
The Cambodian Prime Minister, Hun Sen, was present at the 6th National Interfaith Forum Against Human Trafficking, which intends to unite the forces of the country to counter the horrible phenomenon, and firmly supported the central theme of the meeting: "Do not use Cambodia as a destination for human trafficking".
The Prime Minister called on all religious communities to strengthen religious harmony in Cambodia to maintain peace and security for the people. It is important, he said, to prevent Cambodia from becoming a refuge for organized criminal groups involved in human trafficking. Considering that the phenomenon of human trafficking is present in Cambodia and seems to have an increasing trend in recent years, Prime Minister Hun Sen added that the nation must act in a collective effort, which involves state apparatuses and local administrations, but also all the social and religious forces in preventing trafficking and monitoring the situation at the local level, especially in the poorest areas, identifying and reporting traffickers to the police. "Good interfaith cooperation in Cambodia will enable success in combating human trafficking", he said.
The event was attended by government officials, NGO workers, religious leaders, scholars, sociologists, young people, students. Since 2017, the National Committee to Combat Human Trafficking, chaired by Deputy Prime Minister and Interior Minister Hom Sar Kheng, has been actively collaborating with key Cambodian religious leaders in organizing a national interfaith forum dedicated to the topic. The assembly reaffirmed the common commitment to establish agreed lines of action to put an end to abuses on human dignity and human trafficking, which mainly affects young women and children. Furthermore, the meeting "is an opportunity to pray for the Cambodian people, so that the Lord may give a happy, prosperous, good-oriented life", say the Catholic faithful present.
In this assembly - say the Cambodian faithful - religious harmony is demonstrated and strengthened in Cambodia, a nation where every religious group is committed to cooperating and supporting each other to avoid conflicts, divisions and damage in society. Religious harmony - it was said in the conference proceedings - plays an important role in promoting individual well-being and social security, as well as in strengthening the spirit of unity to combat a criminal phenomenon such as human trafficking. The National Interfaith Forum intends precisely to be a moment in which the unity of the nation is revealed, on a political, social, cultural and religious level.
"It is positive that government officials, religious leaders and others are unanimously committed to the fight against human trafficking in Cambodia", Bishop Alvargonzález told Fides. "We all need tireless work from the government of Cambodia and religious leaders to help victims of human trafficking; together we need to find ways to promote human rights, dignity, education and social and economic well-being in families and in societies. In every saved child we see the face of Christ", he added.
The Royal Government of Cambodia has decided to set the date of August 20 of each year, starting from 2023, as a fixed date for the National Interfaith Forum Against Human Trafficking, urging all religious communities to meet in the provinces, districts, in cities or villages to pool resources and offer cooperation in the fight against human trafficking, evaluating common lines of action and results.
According to the data released in the Forum, in the last month (since August 18 to date) the Government has received 368 complaints of victims related to human trafficking, which have led to the arrest of 41 suspects of three different nationalities. In August alone, 241 Indonesian people were repatriated from Cambodia to their country of origin after being trafficked.
Cambodia is a country of origin, transit and destination for human trafficking. Traffickers are included in organized crime, and exploit parents, relatives, friends, neighbors.
Although human trafficking is a crime in Cambodia, the country has a serious problem of child sex tourism, with children often being held captive, beaten and forced into prostitution. According to UNICEF, more than 35% of Cambodian's 15,000 prostitutes are girls under the age of 16.
The phenomenon of human trafficking, it is noted, involves neighboring countries such as Thailand, Indonesia, China, Taiwan and therefore has a transnational dimension, which now widely exploits new technologies, starting with online fraud and grooming. Last week, Cambodian police arrested 15 Thai citizens wanted for computer fraud and illegal work in Sihanoukville. According to the "Migrants for Garden of Hope Foundation", a Taiwanese NGO that promotes assistance programs for victims of trafficking, most of the Taiwanese victims are between 24 and 29 of age, with 629 cases of Taiwanese citizens reported in 2022.
Cambodia's population is 16.9 million citizens, 95% Buddhists. The remaining 5% of the population includes Christians (including 20,000 Catholics), Muslims, animists, Baha'is, Jews and members of Cao Dai. (PA/SD) (Agenzia Fides, 30/9/2022)