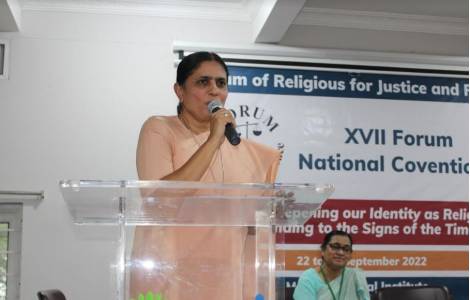 Hyderabad (Agenzia Fides) - "To be prophets in a Church often disfigured by ritualism, to remain steadfast in faith, anchored in Christ Jesus, in the midst of the tribulations that arise from choosing to stand alongside the poor and oppressed": this is the intention expressed by the members of religious institutes and congregations, men and women, from 16 Indian states, gathered from 22 to 25 September in Hyderabad (Indian state of Telangana) for the national convention of the "Forum of Religious for justice and peace".
The final declaration of the conference, sent to Agenzia Fides, affirms the objective of "deepening our identity as religious and responding to the signs of the times", starting from the Apostolic Letter of Pope Francis to all consecrated persons, on the occasion of the Year of Consecrated Life (November 21, 2014).
Sister M. Nirmalini, national president of the "Conference of Religious of India", recalled that the Pope asks consecrated life to "awaken the world", to bear witness to the world that there is another way of being, acting and living , a prophetic way of life". "To awaken the world - the President affirmed - religious must be attentive to the joys and the cries of the world around us and to the call of God. Where we are, what we see and how we hear, everything counts. When we look at the world, we see not only incredible love, kindness, beauty and generosity, but also people and a land that suffer needlessly and cry out for a response. We are called to respond".
Meera Sanghamitra, leader of the National Alliance of Peoples' Movements (NAPM), addressing the burning social issues that agitate the Indian society, indicated the paths to follow, "hope, healing and harmony, as well as the struggle , solidarity and commitment in the current social, political, economic, cultural and religious context".
This is the analysis of the situation in India, proposed by the document of the Indian consecrated persons: "As religious committed to justice and peace, says the Final Declaration of the Forum sent to Fides, we express our concern for the deterioration the situation of our nation on all fronts. Global indicators now place India at the bottom of the scale. The poor in India are getting poorer every day; the rich and powerful continue to profit from their expenses and accumulate outrageous amounts of wealth. Adivasis (tribal) are dispossessed of their lands. Dalits and other subordinate groups are still denied dignity, equality and justice Religious minorities (especially Muslims and Christians) are targets of hate speech and persecution, while politicians continue to systematically denigrate and demonize them for the purpose of division and violence. Intolerance is on the rise. Unconstitutional anti-conversion laws take center stage today. Labor Codes go against the workers' rights and favor big, profit-making companies. The plight of migrant workers was highlighted when the lockdown was announced in March 2020. Fishermen in Kerala and other parts of the country are battling against companies that intend to destroy their livelihoods. Unemployment and spiraling inflation have had a serious impact on the lives of the poor.
The text continues by deploring that "the new national education policy goes against the poor and against minorities. Corruption is widespread, crony capitalism is rampant. India was ranked last (180 out of 180 countries) in the Environmental Performance Index (EPI) 2022". Furthermore, "human rights defenders who take a stand against the government are attacked, imprisoned and even killed (as we painfully experienced in the death of our brother the Jesuit Stan Swamy)".
The religious say they are "deeply saddened" because "the democratic, pluralistic and secular fabric of our country is being destroyed" and call on the Church to achieve an authentic "synodality", abandoning "a clerical and patriarchal mentality", which also practices discrimination caste within the Church, and by showing courage and transparency.
As "disciples rooted in Jesus, aware that personal transformation is the first step towards social transformation, ready to actualize the values enshrined in the Constitution of India", Indian religious say: "We will continue to strive to build more inclusive communities, transcending religious, caste, gender, ethnic divisions and all forms of sectarianism "and underline "the involvement in the lives of the poor and marginalized, the excluded, the exploited and the vulnerable". This will enable us to respond effectively and prophetically to the signs of the times for a more just and peaceful society".
Finally, the Forum intends "to encourage more and younger men and women religious, committed to the themes of justice and peace". (PA) (Agenzia Fides, 26/9/2022)