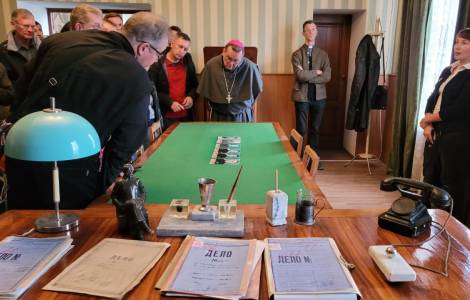 Karaganda (Agenzia Fides) - "Even in the most dramatic circumstances, God gives people hope. Where there is God, there is peace and unity and we are called to seek this unity and this peace above all in our hearts". Thus Msgr. Nikolaj Dubinin, Auxiliary Bishop for the Archdiocese of the Mother of God in Moscow, spoke during the homily of the Mass which he presided at the end of the second day of pilgrimage for the 78 Catholics who traveled from Russia to Kazakhstan on the occasion of Pope Francis' apostolic journey. The celebration took place yesterday in the Catholic Cathedral of Our Lady of Fatima, following the group's visit to KarLag, an acronym for the Stalinist concentration camp system of Karaganda. "We should not expect anything from others" - continued the Bishop, "but we are called to bring unity and peace to others. Many prisoners in KarLag and other places of suffering during the years of persecution and totalitarianism have by faith witnessed God's grace even in these inhumane circumstances. They did not lose God, they did not lose faith, hope and charity. On the contrary, it was in God that they found strength. The Lord also invites us today to be witnesses and heralds of unity and peace. He himself gives us the grace to seek this peace and this unity, to bring it into our families, our communities, our local churches, and to witness and spread this gift in society. Thus, the Church becomes a prophetic sign of God's unity and peace on earth, torn by conflict and discord."
The Cathedral of Our Lady of Fatima, consecrated in 2012, stands in the center of the KarLag region, which during Stalin's era was a kind of "state within a state" and covered an area slightly less than that of France. During the visit, words gave way to silence and the pilgrims prayed for the many men and women who suffered and testified to their faith in Christ, until the end.
The group, which left on September 12, found hospitality in several Catholic communities during the long bus journey to the former Soviet republic of Kazakhstan. "The pilgrimage, continues Bishop Dubinin, could be described as a concentration of the experience of the pilgrim Church on earth. On this journey, we also represent this pilgrim Church, which is made up of different people and which brings us all together. Along the way, we have the most diverse experiences: joy, suffering, beauty, hospitality and poverty. All this pushes us towards the most important quest of all: that of our mission as individuals and in our communities. Here, the Lord brings us closer to different communities in Kazakhstan, which are a tangible sign of his presence".
Nikolai Dubinin, a Conventual Franciscan, was appointed auxiliary bishop of the Archdiocese of the Mother of God in Moscow by Pope Francis in 2020 and is the first ethnic Russian Catholic bishop. He currently resides in Saint Petersburg and is in charge of the northwestern and western part of the Archdiocese of the Mother of God. Today, the pilgrims, accompanied by Bishop Dubinin, will join Pope Francis in prayer in Nur-Sultan and will then return to the Russian Federation on September 16. (CD) (Agenzia Fides, 14/9/2022) 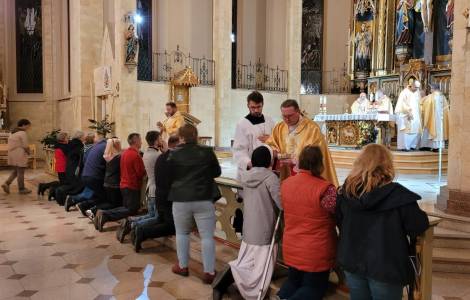