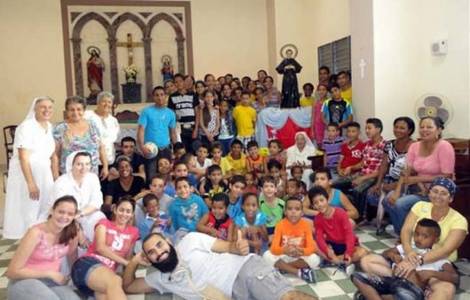 Havana (Agenzia Fides) - The referendum on the new "Family Code" will be held in Cuba on Sunday, September 25, at the end of a long process of elaboration. The National Assembly of People's Power unanimously approved this Law after a broad process of widespread consultation and scheduled for a popular consultation on September 25, has already been published. If the yeses prevail, the law will come into force the following day, if the nos prevail, the current 1975 Code will remain in force.
On this occasion, the Cuban Bishops reiterated the criteria and guidelines of the Catholic Church in this regard, already expressed in other circumstances. In particular, the determination with which violence within the family is rejected; the identification and protection of the rights of grandparents; the care of the elderly, disabled and vulnerable people are seen as positive elements in the text. Other reasons for consent come from compliance with the provisions of the Convention on the Rights of the Child, in particular in the context of assistance to those who are in unfavorable situations or are pregnant.
The Bishops then highlight other aspects of the Code that are not in harmony with the principles, values, religious beliefs of the Cuban people. "The introduction into our legislation of the criteria of the so-called 'gender ideology', which supports many of the proposals, does not benefit the Cuban family", they write in their message.
It also refuses the possibility that minors can take decisions without the consent of their parents that involve irreversible clinical and surgical processes, which determine existential or identity situations for which they are not prepared. Other critical points noted by the Bishops concern the legal adoption of children by same-sex parents, assisted human reproduction techniques for same-sex couples, postmortem in vitro fertilization. Nor is the so-called "solidarity gestation" considered ethical, whereby a woman who carries a baby in her womb for nine months at the time of birth hands the newborn over to other people.
"The marriage between a man and a woman, which is the natural basis of the family, cannot be replaced or deformed to give way to other legally constructed forms", the Bishops reiterate, citing the original plan of the Creator described in the book of Genesis : "This revealed truth sustains the faith of all Christians".
"We are disappointed that these and other proposals notoriously questioned by society remain intact in the Code that is now being submitted to referendum", the Bishops write, also underlining that the official campaign to present the proposed text as suitable, used all means of communication available, while for an informed vote "it is necessary to have a plurality of information that allows citizens to make their own decision. Information, flowing in one direction, without other counterweights, operates as a conditioning factor, and the resulting vote will necessarily and inevitably express a conditioned will".
The Bishops appeal "to the conscience and responsibility of all Cubans, believers and non-believers", so that at the time of the vote they keep in mind what their conscience, their faith, their convictions and principles dictate, "thinking not only of the current generations, but also to future ones, and to the spiritual and material well-being of all Cubans". Finally, they ask for the intercession of the Virgin de la Caridad, our Mother and Patroness, so that, "enlightened by the Holy Spirit, we may make the best decision for the present and the future of the children of this nation". (SL) (Agenzia Fides, 13/9/2022)

AMERICA/MEXICO - Referendum on the revocation of the presidential mandate: for the Bishops "it is a decision of great responsibility"