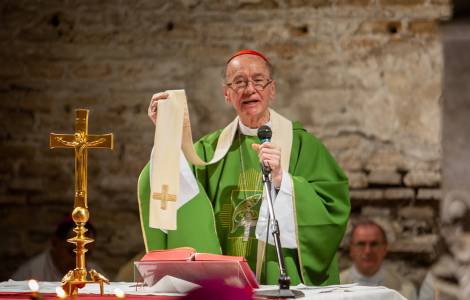 Brasilia (Agenzia Fides) - "Cardinal Claudio Hummes influenced the Church in Brazil with his activity, especially during his episcopal ministry, which spans almost five decades. From the beginning of his episcopal ministry, he contributed to the mission of this Episcopal Conference in the dimensions of ecumenism, laity, family, culture and, more recently, the reality of the Amazon. He was also involved in the Pastoral Care of Labor for several years". This is how the National Conference of Bishops of Brazil (CNBB) expresses itself in a message of solidarity to family members, to the Archdiocese of São Paulo, to the Franciscans and to the friends of Cardinal Claudio Hummes, who died on Monday, July 4, at the age of 87 years old.
"In recent years - continues the note from the CNBB -, his commitment allowed a new impulse to the presence of the Church in the Amazon, promoting, through the Pan-Amazonian Ecclesial Network (REPAM), greater articulation, listening to the pains and joys of peoples and the leadership of the communities. This journey was crowned by the Synod for the Amazon and the publication of the Apostolic Exhortation Querida Amazonia. The creation of the Ecclesial Conference of the Amazon, of which Don Claudio was at the head until his health allowed him, also reveals the effort to realize the dreams indicated by Pope Francis for the Amazon region".
The Pan-Amazonian Ecclesial Network (Repam) and the Ecclesial Conference of the Amazon (Ceama), both fruits of the pastoral work of Cardinal Hummes, published a joint declaration "of thanksgiving to God" for the luminous legacy left by Cardinal Hummes, who was President of these two ecclesial realities. "His legacy and memory will continue among us as sister organizations that he promoted with his strength, his love and his leadership and which will continue to hold hands building a common path, respecting our differences, keeping us in communion with our beloved Pope Francis". The statement recalls Cardinal Hummes' preferential option for the Amazon and its indigenous peoples, his impulse to be a "Church that goes forth" to respond to the challenges of the Amazonian territory in a synodal way, "where not only the pastors, but also the consecrated persons, women and lay people are present, as subjects". Repam and Ceama reaffirm their commitment to continue to take care of the Amazonian biome, of its integral ecology, "in a Church that listens, walks and respects cultures, identity and spirituality of the local communities of the Pan-Amazon region". (SL) (Agenzia Fides, 5/7/2022)

VATICAN - Consistory for 21 new Cardinals, among them 7 Ordinaries of jurisdictions entrusted to Propaganda Fide