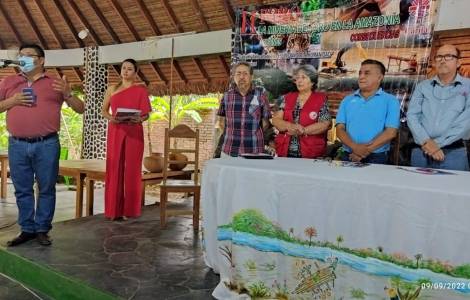 Rurrenabaque (Agenzia Fides) - The rejection of mining in all its forms and the blocking of the import of mercury due to the serious damage it causes to the environment and health were some of the conclusions of the "Second Forum on Gold Mining in the Bolivian Amazon", organized by Caritas - Social Pastoral of the Apostolic Vicariate of Reyes (PSCR) in the city of Rurrenabaque, Beni, on September 9 and 10. The objective was to promote exchanges between institutions, networks and organizations, with a view to reflection and subsequent action on the environmental and public health problems arising from gold mining in the Bolivian Amazon. Among the speakers, national and Peruvian specialists presented studies and concrete experiences, representatives of institutions working on the subject and indigenous people from the Moseti and Tsiman communities.
In the note published by the Bolivian Episcopal Conference, sent to Fides, it is pointed out that studies have shown that members of the indigenous peoples of the region crossed by the Beni, Tuichi and Quiquibey rivers have a high level of mercury concentration in their
bodies, therefore their life is in danger. It has also been stated that gold mining, especially cooperative mining, has caused environmentally damaging deforestation, and that mercury is polluting rivers, air and land with devastating effects on human and animal health.
The document published at the end of the meeting emphasizes in its most important parts that "the Bolivian Amazon is a region full of life, where currently
29 indigenous peoples live, as well as thousands of species of plants, animals vertebrates, birds and fish species, reptiles and amphibians, among others, which make it an invaluable wealth for the world".
Among the social consequences caused by the exploitation of gold in the region, the division between communities, migration and the loss of culture were highlighted, which constitutes a violation of the rights of indigenous peoples, such as life, health and food, established in the political constitution of the State.
After two days of analysis and debate, it was proposed that the state should be held responsible for the effects caused to people through economic and social compensation proportionate to the damage caused by the use of mercury and other chemicals. Furthermore, the Bolivian people and the international community should be urged to work for unity and the integral defense of the Common Home. It was also requested that the departmental and municipal governments intervene to make the mining cooperative societies responsible for the study and permanent monitoring of the pollution of rivers, flora and fauna, as well as the loss of productive capacity of the soils and the violation of fundamental rights.
Participants in the Forum also propose to: publicize the effects of mining, in order to raise public awareness; strengthen indigenous and peasant justice in order to make it an important tool for the struggle of communities and the exercise and defense in different areas of justice; work on new ways to get a better income and a better life, such as experiments in agroforestry systems, ecotourism, organic production and others; reject any mining concessions in protected areas and indigenous territories. (SL) (Agenzia Fides, 14/9/2022)