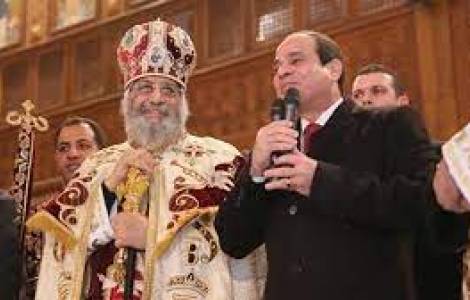 Cairo (Agenzia Fides) - On the occasion of the 9th anniversary of the so-called "June 30 Revolution", which in 2013 led to the overthrow of the Egyptian government led by the Muslim Brotherhood, the main representatives of the Churches present in Egypt ratified in messages and public interventions its own positive judgment regarding that controversial event of the recent national historical event that marked a turning point in the traumatic political transition of the great North African country. At the traditional weekly catechesis meeting held on Wednesday June 29 at the Coptic-Orthodox Cathedral in Alexandria, Coptic-Orthodox Patriarch Tawadros II said that the June 30 Revolution saved Egypt from the chaos and darkness that had engulfed the country in the previous year. Pope Tawadros, recalling the 9th anniversary of the so-called "Revolution", congratulated President Sisi, the government, the armed forces and the entire Egyptian people and thanked God for all the blessings granted by the Almighty to the land of Egypt . "We know that ours is a country blessed for having been visited by Jesus and for having welcomed the Holy Family," added the Patriarch, who also implored that divine protection continue to guard the 105 million Egyptians in peace and prosperity. For his part, Coptic-Catholic Patriarch Ibrahim Isaac Sidrak, also as President of the Council of Catholic Patriarchs and Bishops in Egypt, sent a congratulatory telegram to President Abdel Fattah al-Sisi on the occasion of the ninth anniversary of the June "Revolution". "On behalf of the Council of Catholic Patriarchs and Bishops in Egypt, and of all Catholic organizations and institutions, as well as on my behalf, we congratulate His Excellency the President of the Republic Abdel Fattah al Sisi on the occasion of the IX Anniversary of the June 30 Revolution.
The Catholic Church in Egypt - continues the telegram sent by the Coptic Catholic Patriarch - confirms its ties and its support to the state authorities, under the leadership of President Abdel Fattah al Sisi, and prays that Almighty God can guide them in pursuing the good of our beloved people".
On June 30, 2013, approximately one year after the democratic elections that saw the electoral victory of the Muslim Brotherhood and consequently its leader Mohamed Morsi became President of the Arab Republic of Egypt, millions of Egyptians (more than twenty, according to international media estimates) took to the streets to protest against the government and provoke early elections. At this juncture, the Armed Forces, headed by General Abdel Fattah al Sisi (who also held the position of Defense Minister), gave the political forces a 48-hour ultimatum to overcome the impasse that had paralyzed the country for weeks, complying with the protests of the demonstrators. On July 3, the military ousted President Morsi, who was subjected to measures restricting his freedom along with his collaborators and other members of the government. On July 4, Judge Adli Mansur was appointed interim President. Abdel Fattah al Sisi, after resigning from his military posts, stood for the presidential elections of May 24 and 25, 2014, being elected President of the Arab Republic of Egypt with 96.91% of the votes. (GV) (Agenzia Fides, 30/6/2022)